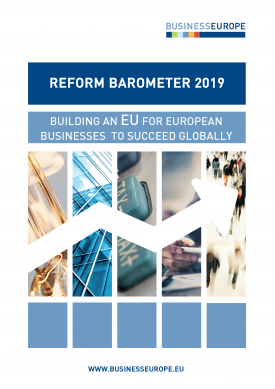 BusinessEurope’s EU Reform Barometer 2019 "Building an EU for European Businesses to succeed globally”, published on 20 March 2019, shows that the EU needs to do more to improve its competitiveness as EU growth has now been lower than US growth for 7 of the last 10 years. In addition, the Reform Barometer contains our annual survey of our member federations regarding progress on structural reform.

This year’s Reform Barometer looks in particular at how Europe is falling behind in its ability to develop world-leading firms.

We arrive at this conclusion for 3 reasons:

Against this background it is concerning that, according to our survey of member federations, governments have failed to step up their reform efforts.  Our member federations consider that member states have satisfactorily implemented only 20% of the essential reforms agreed with the EU.

Detailed assessments by national member federations of progress on the country-specific recommendations (CSRs) issued by the European Commission can be downloaded below.