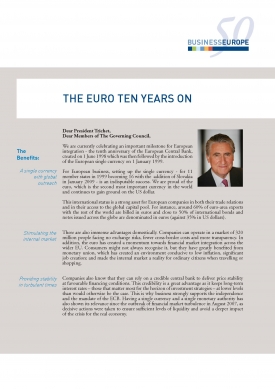 The euro ten years on - letter from Ernest-Antoine Seillière to Jean-Claude Trichet and members of the ECB Governing Council
213.21 KB | 28/05/2008
Public lettersReports and studies

To celebrate an important milestone for European integration - the tenth anniversary of the European Central Bank, created on 1 June 1998 which was then followed by the introduction of the European single currency on 1 January 1999 - President Ernest-Antoine Seillière sent a letter to ECB President Jean-Claude Trichet and members of the ECB Governing Board. This letter explains the benefits of the single currency and outlines challenges ahead.