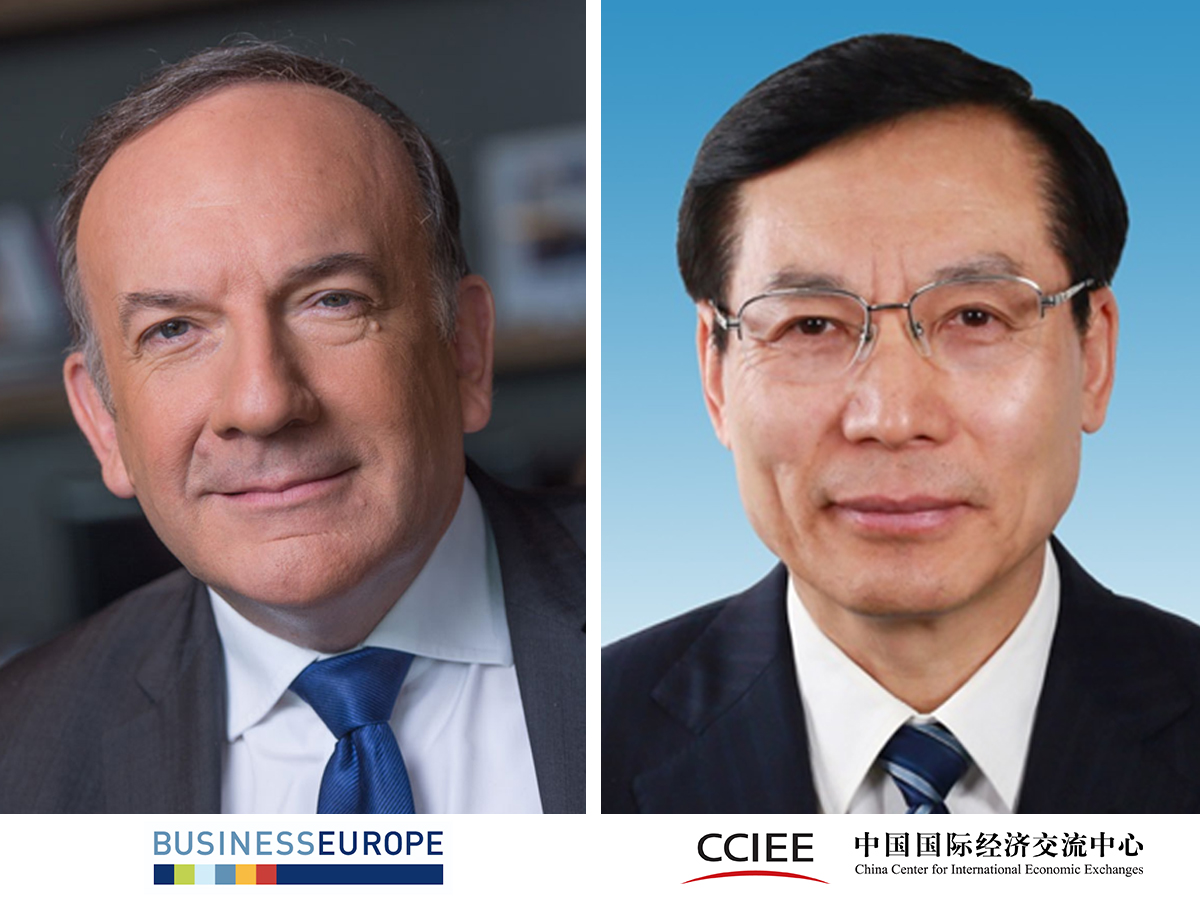 "Politically speaking, EU-China relations are facing one of their most difficult moments in recent history. At the same time, our economic interdependence is increasing: China has become the EU’s largest trading partner for goods in 2020 and it is now the major growth market for many European companies”, said Pierre Gattaz, President of BusinessEurope, at the 4th EU-China CEO and Former Senior Officials Dialogue on 23 November. The event, which is co-organised once per year by BusinessEurope and the China Center for International Economic Exchanges (CCIEE), brought together 35 business leaders, top academics and former senior officials from the EU and China. For half a day, participants exchanged on EU-China economic relations and on ways to take them forward. The topics discussed included the economic recovery from the Covid-19 pandemic, the green and digital transitions, the reform of the multilateral trading system, as well as the investment climate in the EU and China and ways to deepen and modernise our economic relationship and create a level playing field. Under normal circumstances BusinessEurope would have hosted this edition of the dialogue in Brussels, but due to the Covid-19 pandemic it had to be held digitally. “Against the current context of strong economic ties, contrasted with political tensions and fewer people-to-people contacts between the EU and China, the discussions that the CEO and Former Senior Officials’ Dialogue fosters are more important than ever", added President Gattaz.

Business call for a strong and effective WTO 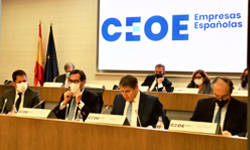 “While on the one hand we see EU economy coming back strongly, which gives ground for optimism, we also see Europe's exports and production challenged by growing strains, bottlenecks and high energy prices. Europe is at the crossroads and currently under pressure from many sides. If we want a strong EU economy that provides jobs and prosperity, there is no alternative to joint action on European level”, said BusinessEurope Director General Markus J. Beyrer at the meeting of the junta directiva, the board of directors of our Spanish member CEOE, in Madrid that was held on 17 November. In his remarks, Beyrer lined out BusinessEurope key priorities, underlining the importance for European Business to defend and further develop the Single Market, to stand up against overregulation and bureaucracy, but also in advocating for an ambitious trade agenda and clearer focus on how to make the green and digital transition happen. 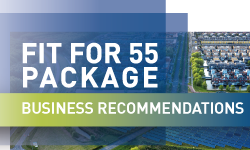 On Thursday, 18 November, BusinessEurope published its comprehensive position on the European Commission's ‘Fit for 55’ package. The paper lines out the assessment and recommendations for 10 of the legislative proposals. It is based on extensive consultation with members over the last months. In its main points the paper underlines the need to pair more ambitious climate targets with a robust carbon leakage regime, open up avenues for investment and support innovation in the breakthrough technologies needed. Europe’s climate policy must be an inclusive green growth strategy, paving the way for all sectors to deliver a contribution to the climate objectives while maintaining competitiveness and economic viability. BusinessEurope will continue to bring up these points and the paper’s more detailed recommendations with policy makers in the next weeks and months. 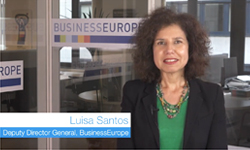 “Supply chain bottlenecks, problems in access to key materials ranging from magnesium to semiconductors, together with an increase in energy and transportation costs, are very much a concern for companies in Europe and in Asia”, said Luisa Santos, Deputy Director General of BusinessEurope, during a video address to the 1st Asia-Europe Economic and Business Forum that took place in the context of the 13th Asia-Europe Meeting (ASEM) in Phnom Penh, Cambodia, on 24 November. “But we can turn these challenges into business opportunities and team up to increase capabilities in semiconductors or to design digital solutions that will simplify customs procedures and reduce constraints in ports”, she added. Santos highlighted that both Europe and Asia have been heavily impacted by the outbreak of the Covid-19 pandemic, a devastating health crisis first, and a severe economic crisis afterwards, of which we are still experiencing the ramifications. Many countries are still lagging behind in vaccination and we continue to have many travel and trade restrictions that undermine the economic recovery. “Innovation and technology can deliver solutions to today’s challenges from health and climate change to connectivity. They also provide more and better opportunities for businesses in Europe and Asia to connect”, she stressed. Watch a video address here.

2022: an important year for social dialogue 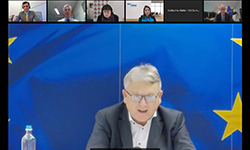 Labour markets situations vary across Europe, but the challenges are often similar. EU Member States and social partners need to work together to achieve the structural adaptation of labour markets and social systems to changing realities. The role of social partners has been crucial for the EU and Member States to design the labour market and social response to the Covid crisis. Growing out of this crisis also requires a key role of the social partners to develop new policies and/or adapt existing ones to a rapidly changing sanitary context, and to improve Europe’s competitive position and long-term growth potential from a structural point of view. BusinessEurope looks forward to cooperation with the European Commission, the Council and the European Trade Union Confederation in the run up to the 2022 Commission’s initiative on social dialogue. This initiative is an opportunity to improve social partners involvement in EU policy-making and to strengthen autonomous social dialogue at EU and national levels, while fully respecting social partners autonomy. These were the key messages passed by Maxime Cerutti, BusinessEurope Social Affairs Director, in a meeting between European Commissioner for Jobs and Social Rights Nicolas Schmit and the European social partners that was held on 19 November 2021. 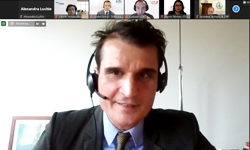 The interplay between skills, innovation and training is important for economic and social advancement. In particular, training funds, which are often governed by social partners, have a key role to play in developing skills for innovation and should be further developed and strengthened. This was a key message of Maxime Cerutti, BusinessEurope Director of Social Affairs, during the final conference of the European social partners' project on skills, innovation and training that took place on 18 November. The conference concluded a two-year project and saw the presentation and discussion of the project’s findings and the European social partners’ policy recommendations. Going forward, BusinessEurope also looks forward to working together with the European Trade Union Confederation, making good use of the valuable information developed through this project, in the run up to the announced European Commission’s initiative towards an EU strategy for universities. 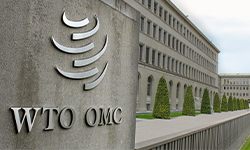 Speaking at the European Parliament on 18 November, BusinessEurope Adviser for International Relations Elena Suárez stated that “the global rules-based trading system that the World Trade Organisation (WTO) embodies has benefited the entire world and business in particular. In fact, the EU trades with its two main trading partners, China and the USA, on WTO terms”. The meeting addressed the main EU and Japan priorities for the WTO reform, with a special focus on the WTO Ministerial Conference (MC 12), taking place at the beginning of December. Suárez explained the European business priorities, which include a clear roadmap and timeline on WTO reform, a trade and health initiative, and progress in the area of the Joint Statement Initiatives. She also mentioned the initiatives of the business community, including a statement with business representatives from the EU’s main trading partners to support MC12. She added that “no doubt the WTO needs reform to adapt the rules to the 21st century challenges and the MC12 is crunch time for the future of the organisation”. The other speakers included Akihiro Okochi, Minister in the Economic Section at the Mission of Japan to the EU, and Antonio Frenandez-Martos, Head of Unit for Multilateral affairs and WTO, at the European Commission.