The future of international trade 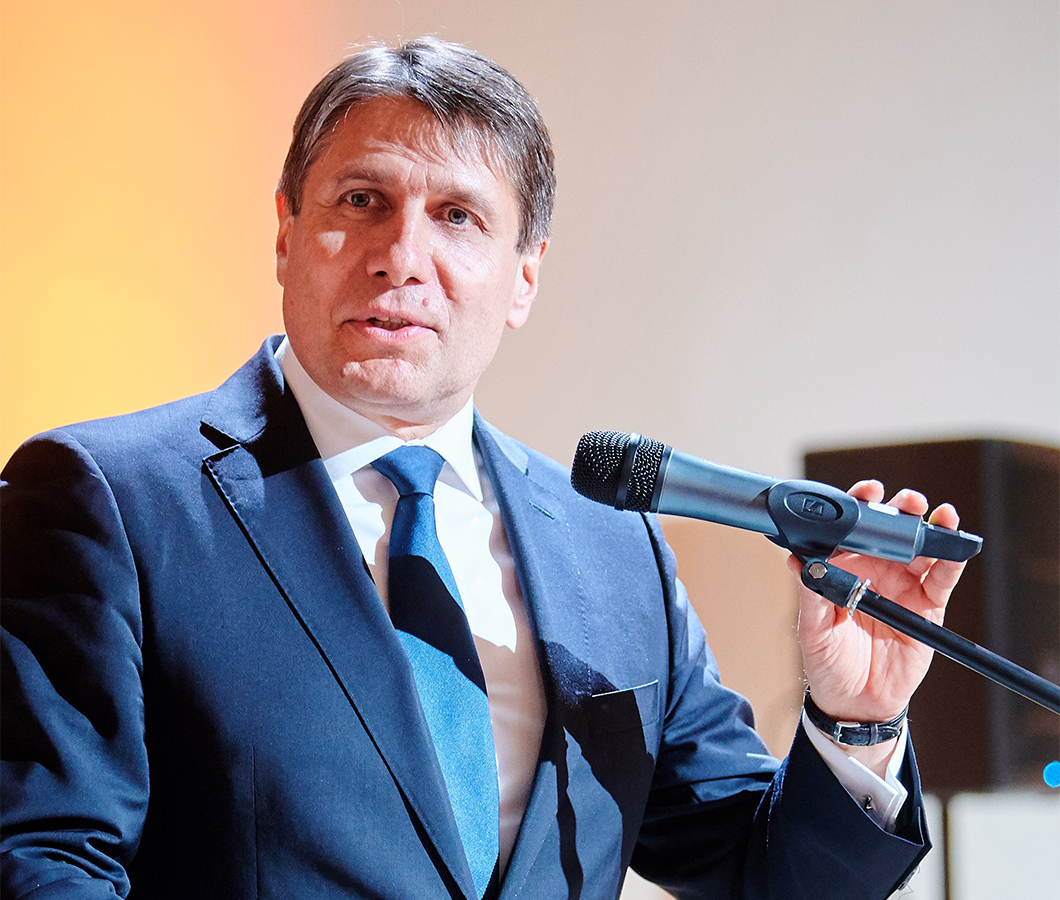 “Those with the USA, China and the UK are the EU’s most important bilateral trade relationships, but we should not miss opportunities with other strategic partners, like Mercosur”, said Director General Markus J. Beyrer at the virtual event “The future of international trade: where do we go from here?”, organised by the Aspen Institute Central Europe in cooperation with the Institute for Politics and Society (IPS) on 19 October. He listed three reasons that make working on a positive agenda with the USA a priority: unleashing the potential of the relationship, resolving disputes and addressing trade systemic challenges, while with China the objective remains to establish level playing field. As to the future relations between the EU and the UK, he stated that business is increasingly alarmed by the complexity of issues that still need to be addressed and the little time left until the end of the transition period. “BusinessEurope urges both sides to keep negotiating, show a strong political will to find a compromise and rapidly conclude a deal, or we risk sleepwalking into a precipice”, he said. Beyrer concluded by saying that the agreement with Mercosur is even more important, economically and strategically speaking, than some of the agreements the EU already has. The EU, he pointed out, would have a first-mover advantage and we must not miss this opportunity. “The deal would also give a unique leverage to the European Union to make Mercosur countries live up to their commitments on labour and environmental rights, including on the Paris Agreement on climate change. This is the most powerful instrument we have: without an agreement, we are left with nothing”, Beyrer stated. 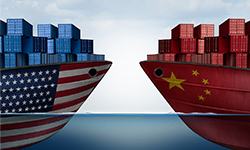 At the beginning of his term as President of the United States, Donald Trump said: “Trade wars are good and easy to win”. However, the reality is somewhat different.

After four years and looking only at the numbers, it seems the ongoing trade dispute between the USA and China has been more beneficial to China:

Apart from the dry reality of the numbers, the fact is that trade frictions have increased significantly in the last 4 years. It´s not only between China and the USA, but also between the EU and the USA or even between Japan and South Korea. Increasingly political objectives take the upper hand over economic goals.

Instead of international cooperation and coordination, we are seeing a surge in unilateral actions. In most cases national security and public order are being used as an excuse, but in fact most measures have purely a protectionist objective. A good example is the extensive use by this US Administration of section 232 that for instance considers European steel or aluminium as a threat to the US national security.

Other areas of strong concern for business are export controls and sanctions. The rule used to be international coordination and use of multilateral frameworks. The reasons are obvious. If countries start going solo there will be market fragmentation and huge disruptions in global value chains. However, some governments now see sanctions and export controls as tools to bring back production, limit access to key technologies and force companies to decouple business operations.

We have seen numerous US actions to limit access to key technologies and force companies, both US and foreign-owned including European, to stop doing business with some Chinese companies. The extraterritorial nature of US sanctions, the strong exposure of many companies to the US market and the extensive use of the US dollar in international transactions make these measures impactful and extremely effective.

Now China seems to be following the same path with the new Export Control Law that has just been adopted. Also in this case political objectives trump economics. The main purpose is to retain technologies and key materials in China, retaliate against third country actions. Also here, going against existing business models and favouring decoupling.

In Europe we are also preparing legislation that could have a strong impact on supply chains and potentially lead to decoupling if the costs of compliance and doing business in certain countries are too high.

This period of uncertainty and increasing trade frictions could have a strong and lasting impact on global supply chains and business operations. The question is how deep it will go and how much it will change trade, investment and technology flows.

Harmonised standards: let's use the momentum and move forward 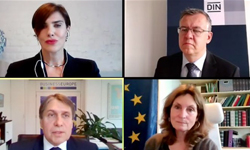 During CEN/CENELEC's multi-stakeholder dialogue on 19 October, Director General Markus J. Beyrer reiterated the need to solve problems with the governance of harmonised standards, which are critical for the functioning of the Single Market and the green and digital transitions. "While I am hopeful that we can solve this issue, a change of approach by the European Commission is needed. We have been talking for a long time. Let's use the political momentum we have now and move forward," he said. Kerstin Jorna, Director General of the European Commission’s DG for Internal Market, Industry, Entrepreneurship and SMEs, also participated in the discussion, as did representatives from the CEN/CENELEC membership and societal stakeholders in standardisation.

COVID-19 crisis is an opportunity for stronger EU-India cooperation 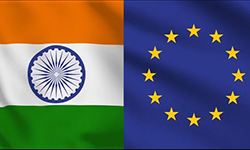 “The COVID-19 crisis is making an even stronger case for EU-India cooperation. Both the EU and India want to build more resilient supply chains in order to mitigate external shocks”, said Luisa Santos, Deputy Director General of BusinessEurope, in an event jointly organised by the Port of Antwerp and CII- Confederation of Indian Industry. She pointed out that this should be done through diversification by creating more trade and investment opportunities, more supply and consumption options. “We need to use this crisis as an opportunity to better trade and investment flows between the EU and India”, she said. The EU and India were negotiating a free trade agreement but negotiations have been stalled for years. However, there are other ways of improving business for European and Indian companies. “The EU and India can work in a positive agenda for business by improving cooperation in different areas ranging from customs procedures and standards to investment facilitation and protection”, Santos stated. Healthcare and climate change, she added, are also areas where we can improve conditions for European and Indian companies to work together and develop new business solutions. “Trade will be a key engine of economic recovery in the EU and in India”, Santos concluded. 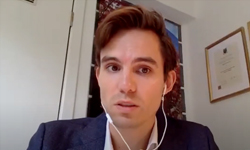 “It is positive to see in the Circular Economy Action Plan that the European Commission wants to strengthen international cooperation on circular economy. What would be even better is if the Commission puts in place milestones to ensure that international cooperation makes real progress over the coming years”, said BusinessEurope’s Adviser Leon de Graaf at an online webinar organised by the Finnish Innovation Fund Sitra and the International Institute for Sustainable Development (IISD) on circular economy services and international trade. The event also brought together speakers from Directorate General for Trade of the European Commission and the Organisation for Economic Co-operation and Development (OECD). “To be credible on the international stage, policymakers should also address obstacles to circular ‘product-as-a-service’ business models in the EU, for example around the consumer bias towards ownership, learning costs for customers with leasing, and legal challenges”, de Graaf added. 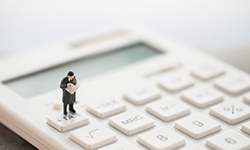 The latest blueprints of the Organisation for Economic Co-operation and Development (OECD) demonstrate the progress being made towards a wide-ranging reform of the international corporate tax system. However, simplifications are needed to avoid undue administrative burden for companies. This was the key-message of BusinessEurope’s Tax Policy Group when it welcomed Sebastian Walz, an official from the German Federal Ministry of Finance, to its meeting on 19 October. In light of the German Presidency of the Council of the EU, the group discussed several on-going files and stressed in particular that the EU must continue to support the OECD negotiations, and avoid bringing forward unilateral proposals on digital tax. The VAT Policy Group also welcomed a representative from the German Ministry of Finance, Alexander Grandisch, to their meeting on 20 October, where they expressed their support for the European Commission's plans regarding the simplification and harmonisation of VAT requirements in the EU. 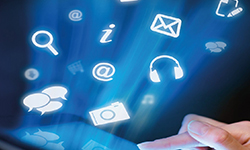 BusinessEurope recently finalised its position on the Digital Services Package (DSA) in response to European Commission consultation to prepare its upcoming legislative initiatives on these issues. The 2 December release will include two Regulations to better tackle the growth of illegal content online and ensure the platform economy remains a competitive place to do business. In relation to the eCommerce update, BusinessEurope believes that clear, fast and harmonised mechanisms are needed to support the removal of illegal goods and content online. Further to this, novel measures should be considered to incentivise platforms to maintain diligent processes of active engagement. In relation to the Digital Markets Act, BusinessEurope believes that while contestability within the platform through truly open markets should be the goal, clarity as to which platforms are considered "gatekeepers" as well as the criteria as to how these characteristics should be measured are required. Appropriate and practicable thresholds should avoid overregulation on smaller platforms that serve only niche markets. BusinessEurope awaits the Commission release and has also closely followed the European Parliament’s (Alex Aguis Saliba MEP) report on the DSA in this regard. Read our full position on the Digital Services Package.

Business call on Unitary Patent system to entry into operation 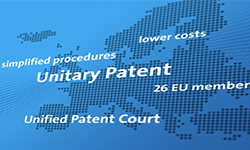 On 13 October 2020, the Administrative Council of the European Patent Office held its virtual meeting and discussed - among other things - the reports of activities of the European Patent Office (EPO) President and of the President of the EPO Boards of Appeal, and the latest developments on the Unitary Patent. BusinessEurope, represented at the meeting by Thierry Sueur and Elena Bertolotto, Chair of the Patents Working Group and Advisor for Legal Affairs, welcomed the results shown in these reports and highlighted in particular the overall positive experience with oral proceedings via video conference and other new tools intended to improve the users’ experience with EPO services. Sueur also stressed the importance of the creation of the Unitary Patent system (UPC) for the industry and called the remaining the Contracting States to finalise the national ratifications of the UPC Agreement and the Protocol for Provisional Application in order to allow the Unitary Patent system to entry into operation as soon as possible, ideally early 2021.