“A strong and resilient economic base is key for European prosperity, people and the planet”, said BusinessEurope’s Director General Markus J. Beyrer at a breakfast meeting with the Coreper I ambassadors on 15 November. The discussion organised by the Finnish Presidency brought together BusinessEurope, the European Trade Union Confederation (ETUC) and EU ambassadors to discuss the key priorities for a comprehensive EU growth agenda. Beyrer presented the key priorities for European businesses and pointed out that we face numerous challenges ranging from fierce international competition with competitors that develop far-reaching industrial strategies, increasing protectionism around the globe, digitalisation and climate change. “If we want to overcome these challenges, we need a strong and resilient industrial base. This is the only way to preserve prosperity, jobs and our high environmental and social standards, which we understand as part of our European Way of Life”, he said, adding that “ambition is good and important, but not enough. What we need now is putting the ambition into action in order to deliver on our goals”. Beyrer also highlighted that European businesses stand ready to play their part and contribute with solutions, innovation, investments and jobs to make this happen. See here our recently published publication on 30 priority areas for action by the EU in the coming five years.

Investing in Research & Innovation is key to fuel growth and address societal challenges. Watch this video to hear more on Horizon Europe from BusinessEurope’s President and representatives of our Polish and Portuguese business federations.

By Maurice Fermont, Advisor on international trade and investment 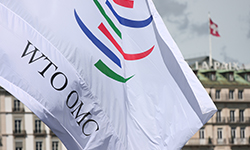 The World Trade Organisation (WTO) is our global home, a place that allows us to trade freely with one another while serving as a bastion against protectionism. And much like a real home, if you do not check and repair the roof for almost 25 years, few people would be surprised to hear it is riddled with holes. They would also agree that taking a sledgehammer to the walls would in no way fix the roof and might end up leaving you homeless instead.

This analogy represents two sides of the debate on the future of the WTO: those who want to reform it and repair the roof and those who are putting it at risk of collapse without a clear alternative.

The WTO was created in 1995 to further liberalise global trade in an inclusive, reciprocal, rules-based manner. Its inclusive membership is comprised of 164 countries and counting, developed and developing alike, some of whom receive special and differential treatment on account of their development status. It is reciprocal because all members have agreed to liberalise their economies through successive rounds of negotiation. And they have done so in a rules-based manner, drawing up common rules for all member countries while resolving their differences through dispute settlement.

But after 25 years there is an urgent need for change. While national economies and business environments have seen radical change, the rulebook governing them has remained largely the same. When the WTO was launched, for example, only 0.4% of the world, or 16 million people, were connected to the internet. Today this figure stands at 58% or 4.5 billion people. The iconic Nokia 3310 mobile phone was launched in 2000 offering basic functions, while today we use our smartphones to order products online and have them home-delivered from abroad within days. Trade in goods and services amounted to $6 trillion in 1995 and grew over fourfold to $25tn in 2018. The global trading environment has changed, and it is important that the WTO keeps up.

A globalised economy needs clear rules and enforcement mechanisms. Discussions on the classification, transfer and storage of data is a case in point. Without rules on data, countries may arbitrarily require data to be stored locally and require access to or the transfer of source codes for companies to obtain market access for software. With the advent of 5G and Industry 4.0 and the increased digital connectivity that this represents, companies trying to protect their intellectual property could face many risks.

The absence of new rules or improved enforcement of existing rules could therefore lead to market fragmentation and new forms of protectionism. Countries could exploit the lack of rules in different areas to undermine the global level playing field and gain unfair advantages, leading to a domino effect.

But rule-making has stagnated, and people could be forgiven for forgetting that the WTO and its predecessor, the GATT, were created as permanent bodies of negotiation through successive rounds. The WTO was created as a flexible institution that would evolve in parallel to the needs of the modern economy. The current Doha round was launched 18 years ago and progress to date has been limited. Initially, the deadlock was caused by disagreements along developing-developed country lines in the areas of agriculture, access to patented medicines and special and differential treatment. The non-market-oriented policies and practices that lie at the root of the US-China trade war, however, have induced a renewed sense of urgency for WTO reform.

Issues such as industrial subsidies, forced technology transfer, the non-market behaviour of state-owned enterprises, export credits, overcapacity and weak enforcement provisions for some existing rules have increased both the cost of stagnation and the need for a breakthrough. The growing share of global trade from 20% of the world GDP in 1995 to 30% in 2018 means the WTO is more important than ever as the guardian of multilateral trade. Yet the current paralysis on rulemaking and reform, the US-China trade war, and the coming paralysis of the Dispute Settlement Body are bringing the WTO to the brink of collapse.

If the WTO cannot deliver on its mandate and regulate trade freely and fairly, why should countries continue to support it? And what are the alternatives? The continued paralysis within the WTO and the US-China trade war have exposed a painful schism in multilateral governance that besets institutions the world over. Can we still achieve meaningful compromise and upgrade the rules governing the global economy?

The pressure of paralysis may well lead to a breakthrough at some point. Plurilateral initiatives for reform are taking shape. But the increasingly visible power struggles may also push us further apart. While the US, the EU and other developed countries certainly need to take their responsibility, it is increasingly up to new players such as China, now the second-largest economy in the world, to decide whether they want to make a meaningful contribution to the multilateralism from which they have so heavily benefited.

One positive for the prospect of WTO reform is that talk of its replacement is limited, and no clear alternative ideas have emerged thus far. But it will not remain that way. New ideas will surface and may include a regionalisation of parts of the global economy. Hopeful observers may look forward to the end of the US-China trade war and a swift return to the days of Doha negotiations but the idea that we can go ‘back to the way it was’ is wishful thinking. History may resemble itself, but it does not move backwards. We would do well to prepare ideas on how multilateral trade governance, even if limited, could flourish in the future. 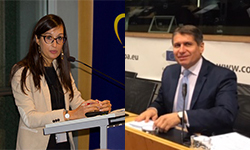 Intellectual Property (IP) plays an important role in facilitating economic growth and boosting businesses' competitiveness. IP offers opportunities to small and medium-sized enterprises (SMEs) to get more income through licensing, sale or commercialisation, and to attract investments. SMEs with more IP right activities are more likely to grow, but only a few make use of IP.  To help companies ripe the broadly accepted benefits of IP, more efforts are needed on IP awareness and access to knowledge, enhanced access to skills and external advice, support to SME internationalisation and digital transformation, and IP enforcement. To achieve concrete results, there is a need to strengthen interaction between EU institutions, IP national offices, local regional and national authorities, business associations, and SMEs themselves. These messages were presented by BusinessEurope at two high level meetings that were held on 14 November: Director General Markus J. Beyrer gave a key speech at the conference "Innovative, collaborative, regional: Smart intellectual property for a competitive Europe", organised by the European Commission and the European Committee of the Regions, and Elena Bertolotto, Legal Advisor for Intellectual Property,  participated at the Working Breakfast "Growing Europe's Technology Markets: Helping SMEs commercialise their inventions" at the European Parliament. 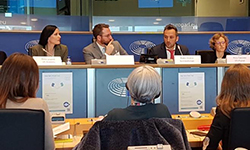 Businesses support simple, balanced and efficient civil justice systems. The representative actions proposal is an opportunity to achieve an EU framework offering consumers appropriate redress while minimising the risk of abuse, especially by actors (e.g. litigation funders, litigation firms) whose only objective is to seek profit at the expense of consumer disputes. Litigation funding is an industry that gets 30%-50% return on investment (due to high stake on the awarded damage) without any commitment to the real consumer interest. As the European Council is about to reach a position, BusinessEurope stresses again that the rush to reach an agreement cannot be at the expense of fundamental safeguards for the effectiveness of an EU collective redress system.  At the minimum, the impact of a new approach, consisting of giving more flexibility to member states’ systems, should be fully assessed. 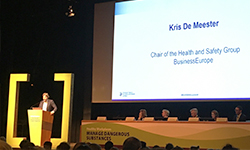 The Healthy Workplaces Summit 2019, which took place on 12 November in Brussels, marked the end of a campaign conducted by the European Agency for Safety and Health at Work (EU-OSHA) and its partners on the management of dangerous substances at workplaces. At the event, Kris De Meester, Chair of the Health and Safety working group of BusinessEurope, reaffirmed the commitment of EU employers to promote safe workplaces that manage efficiently dangerous substances and protect workers’ health. The summit celebrated the achievements of the campaign and gave participants the opportunity to share experiences and best practice on substitution of dangerous substances, minimising exposure to carcinogens and challenges for effective prevention.