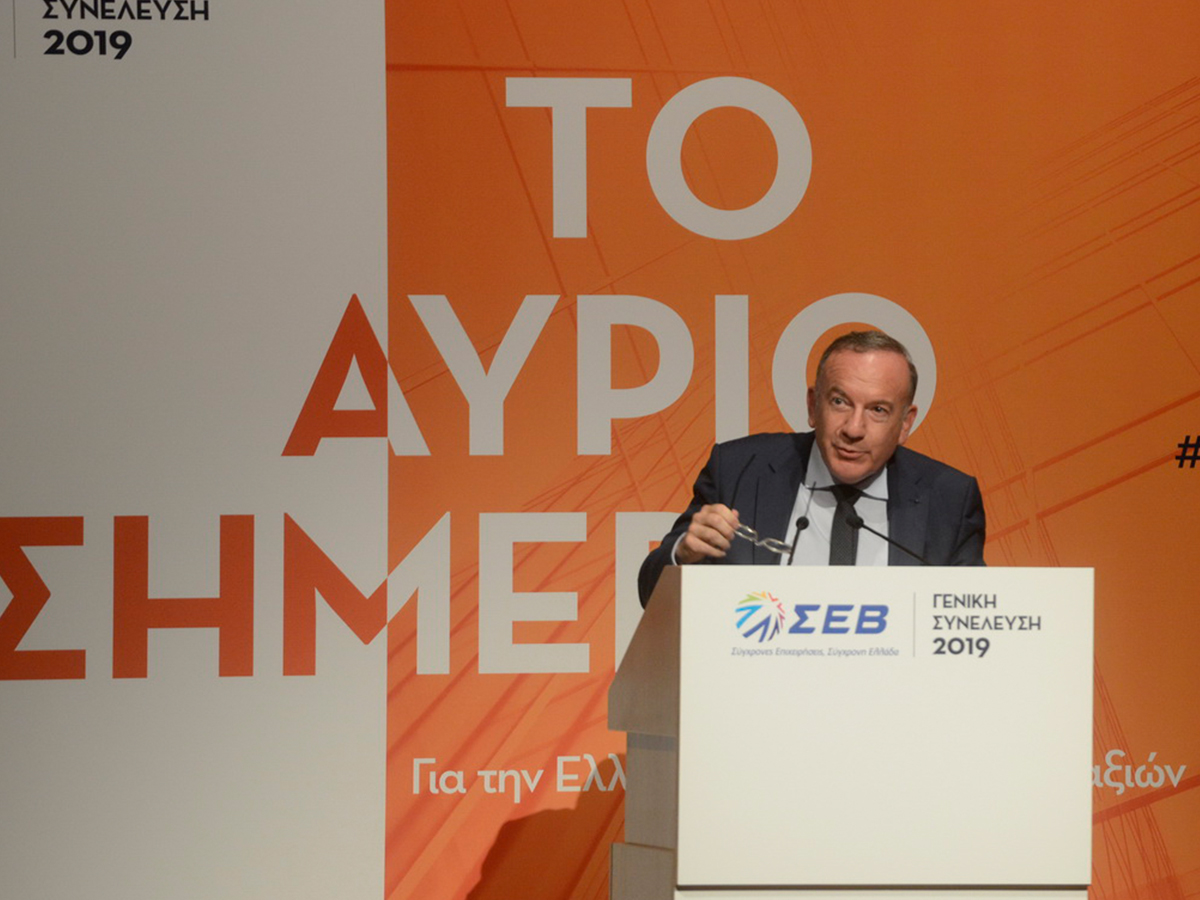 “After nearly a decade of recession, the Greek economy has started to recover, but at a modest pace. The next government should promote a more growth-friendly strategy”, said BusinessEurope President Pierre Gattaz on 18 June at the general assembly of the Hellenic Federation of Enterprises (SEV) in Athens. He talked about new paradigms for inclusive and sustainable growth: “After the EU elections, we need real and sound solutions to companies’ and citizens’ concerns”. Gattaz added that the EU has to put the competitiveness of companies at the heart of its policies and has to work closely with business to create economic conditions that are based on three “Ps”: profit, people and planet. 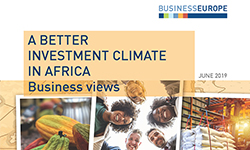 Video message on investing in Africa

What is needed to attract more investments to Africa and why should European companies be present there? Watch BusinessEurope President Pierre Gattaz's replies to these questions.

By Leon de Graaf, Adviser for Environmental and Climate Policy

Europe’s industry might need three to four times as much electricity in the coming decades as they do now to achieve net-zero greenhouse gas emissions (climate neutrality). Next week, on the 26th of June, the Energy Council is expected to adopt conclusions on the future of energy systems in the Energy Union. In forthcoming years, Europe must show a greater willingness to do two things: firstly, design an integrated approach for its future energy supply, and secondly, to coordinate and further integrate Europe’s energy markets.

A lot of ambitious legislation has been passed in the past five years on a range of energy-related issues, from renewable energy and energy efficiency to overall governance of the energy union. These legislative frameworks will enable Europe to probably overachieve on its 40% greenhouse gas emission reduction target by 2030 (compared to 1990 levels), which would be a very welcome development and will show the commitment of Europe to tackle climate change. The big societal debate is now how Europe and other countries in the world can transform their economies to operate in a state of climate neutrality, while simultaneously improve their competitiveness and security of supply.

The objective of climate neutrality is a marathon. Achieving it will require a set of crucial framework conditions and actions, which we describe in BusinessEurope's recently published energy and climate strategy. Two of the conditions that Europe’s energy ministers must help achieve are on how to make sure that Europe’s industries have access to enough affordable, low-carbon energy, and how ministers will boost European coordination for cost-effective policy implementation. A large part of our economy’s decarbonisation will probably be achieved through increased electrification, but for those parts of the economy that cannot be electrified, sources like sustainable biomass, hydrogen and gas will need to be created as well. To achieve this, European energy ministers should first design an integrated value chain approach for securing enough energy supply. For example, energy ministers can:

Secondly, these actions must be coordinated in a better way. Despite significant improvements in some EU Member States in their energy interconnections, the overall European system has not seen any major changes in recent years, with some countries even experiencing decreases in interconnectivity. Wholesale price differences between Member States remain substantial given the lack of interconnectivity and adequate grid development, insufficient market coupling and inappropriate use of interconnectors, preventing the transformation to an Energy Union where energy can flow freely from one Member State to another.

Member States start from different starting points in terms of energy mix, share of industrial activities and financial means, which will make the shift towards climate neutrality more challenging for some than others. Europe therefore needs to become more cohesive and inclusive to implement energy and climate policies to make this shift cost-effectively. Energy ministers have a unique opportunity to lay the initial foundations in next week’s Energy Council and the years to come. 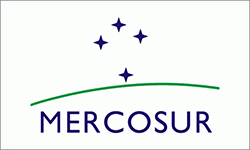 Negotiations between the EU and Mercosur that last for more than 20 years are approaching a critical moment. There is still a possibility to conclude the trade agreement during this European Commission’s term and the coming weeks will be critical. In a letter sent to Commission President Jean-Claude Juncker, BusinessEurope reiterated the extremely important strategic dimension of this agreement at times when international trade suffers from volatility and is negatively affected by increasing protectionism and unilateral measures. As stated in the letter: “Overall the European economy would clearly benefit from an EU-Mercosur Association Agreement and we should not miss the opportunity to gain a first mover advantage in a very closed market of more than 260 million consumers.The final agreement should take into account the interests of all the sectors affected by negotiations in a balanced way”. 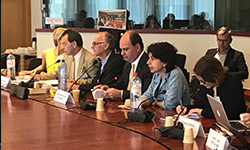 The EU’s approach to China, the World Trade Organisation (WTO) dispute settlement impending crisis, and the development of a strategy for Africa were some of the topics discussed in a meeting organised on 19 June by the European Business Organisation Worldwide Network, an umbrella organisation of nearly 40 European chambers of commerce in key markets like Australia, Brazil, China, all of South-East Asia and increasingly also in African countries. “BusinessEurope’s priorities largely overlap with those of other European business organisations around the world. We will be similarly affected by volatility in international trade relations and the outcome of the recent European elections”, BusinessEurope’s Director of International Relations Luisa Santos said. “The EU-Mercosur Association Agreement is high on the agenda at the moment, but in the short term we will also see the impact of Brexit, and how the EU’s trade agenda will be shaped by the next Commission and Parliament, with a possible increase of importance of the sustainability angle in trade”, she added. 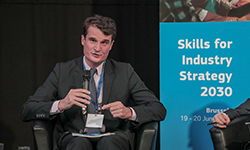 Availability of a sufficiently numerous and skilled labour force is crucial to Europe’s future industrial development. We need to modernise our education and training systems to match the changing jobs and skills needs deriving from industrial change. Data processing and management and rolling out of well-designed new technologies supporting employment and productivity are important game-changers for skills training across the economy. We need to adapt education and training to the many new jobs that are created, and to the transformation of existing ones, e.g. ongoing process of task optimisation for productivity gains and improved working conditions. We need to develop at the same time basic IT skills for the whole workforce, and train a sufficient number of people with integrated engineering and advanced IT skills, where the shortages are currently the highest. These were the key message given by Maxime Cerutti, BusinessEurope Director for Social Affairs at a conference on Europe’s future skills needs on 19 June.

European, American, Japanese, Korean and Chinese Heads of Intellectual Property (IP5) Offices met with their industry patent users' counterparts (BusinessEurope from the European side) in Korea on 12 June to discuss how the patent system can better respond to worldwide technological transformation. The IP5 Offices together handle around 85 percent of the world’s patent applications and help breed new entrants to the economy. Industry representatives expressed their support for the IP5 Offices’ joint-projects to improve patenting processes (more cost-effective processes, less overlapping procedures), and reaffirmed their willingness to work with the Offices in these endeavours. The IP5 Offices and industry agreed to enhance communication on the importance of intellectual property and benefits of IP5 projects to a broader audience. On 11 June BusinessEurope also attended a meeting with industry partners from the five largest patent filling countries to exchange views on common business priorities in this area.