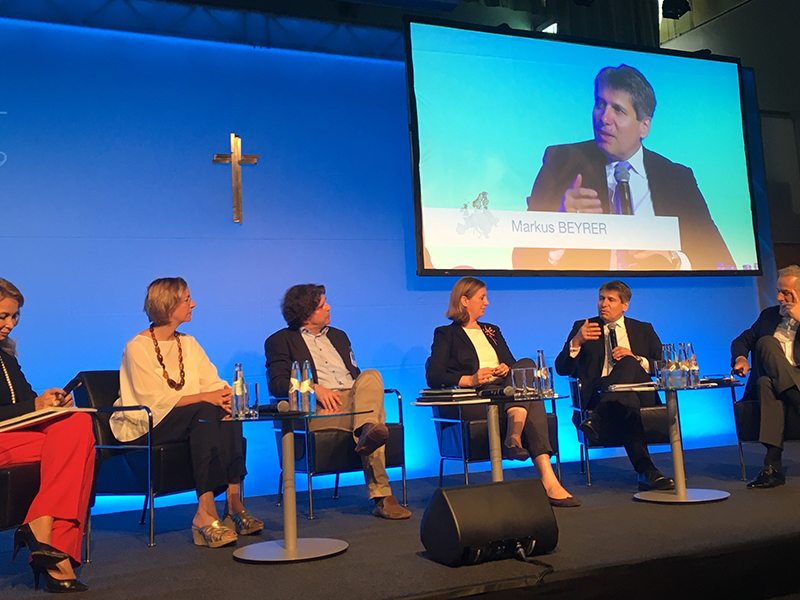 “Europe is still the best place to live and do business,” said BusinessEurope Director General Markus J. Beyrer at the Whitsun Dialogue on 6 May at Seggau Castle in Austria. He added that Europe faces strong international competition from global actors like the US and China, which are anxious to divide Europe apart. “Among the top 15 digital companies in the world there is not a single European one, they are all from China or the US,” said Beyrer. “In Europe we only have small countries and those who do not understand that they are small – this is why we need strong cooperation within the EU and innovation to champion global competition in the future,” concluded Beyrer.

The Commission wakes up on enforcement in services 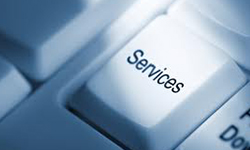 BusinessEurope has been consistently calling better implementation and enforcement one of the top priorities for the Single Market to function well, with “strong Commission’s role, power and ambition on enforcement“ as one of the tools to address these issues (see section II of our strategy paper). Compliance with the Single Market rules in the area of service provision has always deserved a special highlight. Towards the end of the present mandate, the European Commission has finally reinvigorated its enforcement actions in the area of services with a few wide-reaching measures adopted over the last few months.

First, in March 2019 the Commission has taken steps in infringement procedures against 26 Member States to ensure the full implementation of EU rules on the recognition of professional qualifications under the Professional Qualifications Directive (Directive 2013/55/EU). The Commission sent reasoned opinions to 24 Member States (Austria, Belgium, Bulgaria, Croatia, Cyprus, Denmark, Finland, France, Germany, Greece, Hungary, Ireland, Italy, Luxembourg, Malta, the Netherlands, Poland, Portugal, Romania, Slovakia, Slovenia, Spain, Sweden and the United Kingdom) and complementary letters of formal notice to 2 Member States (Estonia and Latvia) regarding the non-compliance of their national legislation and legal practice with EU rules. These steps addressed a wide range of issues as well, from the effective European professional card or possibility to have partial access to a professional activity, to the problems in Member States with setting up of assistance centres or transparency and proportionality of regulatory obstacles.

Second, there is action taken with respect to application of the Services Directive (Directive 2006/123/EC). One Member State received a letter of formal notice with regard to excessively restrictive conditions on service providers, disproportionately affecting service providers coming from other Member States.

Very recently, on 6 June, the Commission added on with letters of formal notice to all 28 Member States, requesting them to improve their points of single contact (PSC) and to provide user-friendly one-stop shops for service providers and professionals under the above mentioned directives. This action relates to what BusinessEurope has been long calling for: an easy and digitised access to the information companies need and a possibility to complete administrative procedures online. In line with Services Directive, Member States had to establish well-functioning PSCs to help service providers overcome administrative hurdles in the access to a service activity but in many instances failed in doing so. The Commission raises issues with the online availability and quality of information on requirements and procedures relevant for service providers (and professionals) who want to make use of their Single Market rights. The letters of formal notice also cover concerns about access to and completion of procedures online through the PSCs, including for cross-border users. Member States have two months to reply to the letters by the Commission. Otherwise, the Commission may decide to send a reasoned opinion and then refer cases to the European Court of Justice.

Focus on correct, timely and transparent implementation of the Single Market rules as well as vigorous enforcement in cases of non-compliance should be the top priority for the incoming new Commission. BusinessEurope expects this approach to be a consistent one throughout the new term of the Commission, rather than being a patchy manifestation of power. 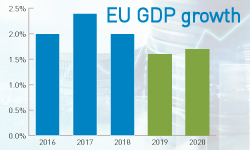 Following the fall in EU growth in the second half of 2018, there are tentative signs that economic activity may be bouncing back following a stronger than expected showing in the first quarter of this year. BusinessEurope’s Spring Economic Outlook published this week shows that whilst businesses foresee a moderate improvement in the cyclical environment in the coming months, growth is unlikely to return to the levels enjoyed 18 months ago.

Moreover, risks to the outlook remain on the downside, with alongside the continuing possibility of a damaging, no-deal Brexit, the recent escalation of trade tensions, particularly between the USA and China, are an increasing concern for EU businesses. The outlook considers estimates from the European Central Bank (ECB), the Organisation for Economic Co-operation and Development (OECD) and the International Monetary Fund (IMF), which all show that an increase in trade tensions would damage not only Chinese and American economic growth, but also significantly impact EU-trade.

With the recent downturn highlighting the fragility of the EU economy, we note the continuing need at both national and European level for structural reforms in product and labour markets, particularly to address skills shortages, especially in the expanding digital economy. The Outlook also calls for action to:

Discussing priorities in the EU-China relationship with the EUCCC 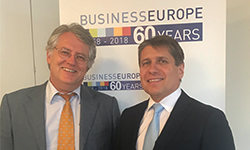 On Friday 7 June BusinessEurope Director General Markus J. Beyrer met with Jörg Wuttke, the newly elected President of the European Union Chamber of Commerce in China (EUCCC). They exchanged views on the EU-China relationship and discussed possible ways for BusinessEurope and the EUCCC to work together. Both agreed that the EU should rebalance its relationship with China in order to achieve a level playing field for European businesses. The economic relationship between the EU and China is important, though China’s retreat from market-oriented reforms and the growing internationalisation of its businesses mean that European companies increasingly face competitive distortions both within China, the EU and in third markets. Through upcoming events in Beijing and Brussels in the second half of this year, Beyrer and Wuttke agreed to work together to amplify the voice of European business. 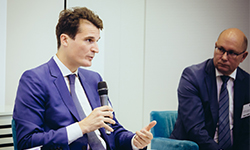 Division of competences between the EU and Member States should be the guiding principle of the EU action in the field of social protection. Member States should be encouraged to reform their social protection systems to respond to demographic challenges and changing labour markets. In particular, national governments and social partners need to cooperate continually to make sure that their pensions systems are financially viable, and fair for all generations at all times. This should be done in a coherent way with efforts to make occupational pensions more attractive for employers. The development of a genuine single market for occupational pensions should also fully respect the diversity of national labour and social rules across Europe. These were the key messages by Maxime Cerutti, Social Affairs Director, at the conference organised by PensionsEurope “Shifting Gears in Pensions” on 6 June 2019 in Brussels. The main aim of this annual PensionsEurope Conference was to discuss the importance of the supplementary pension schemes, national trends and increasing awareness of the importance of diversity in the sector. 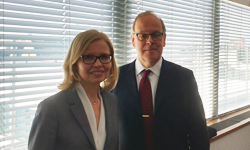 BusinessEurope’s Tax & Value Added Tax (VAT) groups, with the help of the Confederation of Finnish Industries, met in Helsinki on 11-12 June and welcomed officials from the Finnish Ministry of Finance, including Terhi Järvikare, the Head of the Tax Department. In light of the upcoming Finnish Presidency of the Council of the European Union, the Tax group underlined that uncertainty over tax levels and increasing double taxation is more and more seen as a risk by business, and in turn a dampener on investment plans. Such concerns can in part be addressed by putting a greater focus on supporting growth and investment in the development of EU tax policy. In addition, the VAT group noted that Member States need to keep strengthening cooperation between the different national tax administrations to establish greater levels of trust and efficiency to improve the VAT system and reduce VAT fraud. 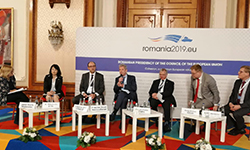 Paul Coebergh van den Braak, Chair of the Free Movement of Goods Working Group, spoke on behalf of BusinessEurope at a high-level standardisation conference in Bucharest on 7 June. The event marked the official end of the Joint Initiative on Standardisation, which started in 2016 under the Dutch EU Presidency and aimed at bringing together interested stakeholders in European standardisation. Coebergh van den Braak was critical about recent developments concerning harmonised European standards, since the European Commission has become increasingly involved in the standard-setting process. ‘Global trade requires global regulations, based on state-of-the-art standards,’ said Coebergh van den Braak. ‘In order to be competitive, we need to ensure that European standardisation is flourishing. The ‘new approach’ is currently in dire straits: what we need is a ‘renewed approach’ to technical harmonisation.’

Building an investment policy for a more cohesive Europe 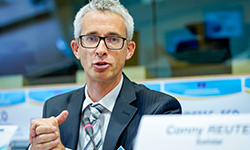 ‘It is time to move the mindset of cohesion policy from redistribution and fast spending to investment, competitiveness and structural improvement,’ was the key message of BusinessEurope Director of Economic James Watson at an EESC event ‘The European Semester and Cohesion Policy’ on 11 June. Speaking at the hearing, alongside representatives of the ETUC and civil society, Watson noted that EU cohesion policy must be an integral part of a European investment strategy aiming at empowering each region with the necessary tools to build-up competitiveness, with cohesion part of a post EU budget which BusinessEurope believes should have a greater emphasis on competitiveness, growth and supporting Member States in implementing reforms. (Photo © EU 2019) 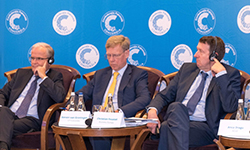 At the invitation of our Romanian member Concordia, we debated the current political situation in the European Union, and its impact on Romanian companies. Senior Policy Adviser Christian Feustel explained how BusinessEurope works, and what we can do for our members.  He also argued that an early, smart and compromise-seeking engagement at EU level can pay off for companies, sectors and an entire national economy. Concordia President Steven van Groningen, Valentin Lazea, Chief Economist of the National Bank of Romania and business representatives discussed a number of priority topics for Romania. Concordia will now strongly engage with Romanian MEPs, its government and future commissioner, in order to make the voice of Romanian business better heard at EU level.