We need to exploit the European window of opportunity now 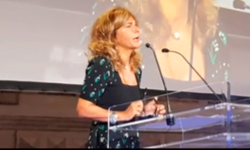 “The European economy, which entered its fifth year of recovery in 2017, with growth expectations of around 2% for the EU as a whole and 2.2% for the Euro area, the unity signals given on the occasion of the 60th anniversary of the Treaties of Rome and the positive outcome of national elections in 2017 are factors that created a window of opportunity for Europe”, said BusinessEurope President Emma Marcegaglia during her intervention in the Annual Public Assembly of Confindustria Mantova, in the presence of the President of the European Parliament Antonio Tajani and the President of the General Confederation of Italian Industry (Confindustria) Vincenzo Boccia. Marcegaglia added that “If we want to strengthen this positive evolution, we need to implement truly effective policies to further increase growth and employment across Europe, mobilising strategic areas such as the common trade policy, the single market and industrial policy”. These are some of the key elements that BusinessEurope presented, at the beginning of September, in an ambitious plan that businesses believe to be fundamental to move forward for the European Union. 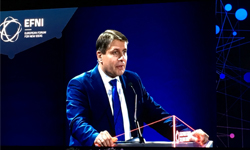 “I am convinced that it is possible to reconcile multilateral, rules-based globalisation, bilateral cooperation and patriotism, without giving in to nationalism and protectionism”, said BusinessEurope Director General Markus J. Beyrer in the opening gala of the European Forum for New Ideas (EFNI). The forum is taking place from 27-29 September in Sopot, Poland and is organised already in the 7th year in a row by our Polish member Lewiatan in cooperation with BusinessEurope. Under the theme “Globalism, bilateralism, economic patriotism? Challenges for business”, the event gathers business leaders, politicians and academia to debate the future of economic growth and employment in Europe. During the opening, DG Beyrer further highlighted that being successful in reconciling globalism, bilateralism and patriotism requires a clear strategy. “And our strategy must be jointly defined within the European Union because together we are stronger than when we act in a fragmented manner”, he concluded. 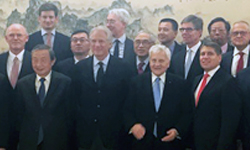 The 1st EU-China CEO and Former Senior Officials’ Dialogue took place in Beijing on 22 and 23 September. “With so much mutual prosperity through trade, investment and innovation at stake, it is imperative for both partners to work together to reduce frictions and foster new opportunities for cooperation wherever they occur”, said Markus J. Beyrer, Director General of BusinessEurope. This new event, jointly organised by BusinessEurope and the China Center for International Economic Exchanges (CCIEE), gathered over 30 CEOs and former Senior Officials from the EU and China. Participants met with the Chinese Vice-Premier Ma Kai and other officials, and discussed how opportunities for closer cooperation in several major fields could create for the EU-China economic relationship. They exchanged views on trade, investment and finance as well as on innovation-driven development, climate change and industrial cooperation. This dialogue has been conceived as an annually recurring fixture. “Both challenges and opportunities change frequently and rapidly in the dynamic world of today. Staying ahead of the curve and proposing concrete and timely solutions requires iterative engagement”, Beyrer concluded.

How to get the European economic recovery to full speed? 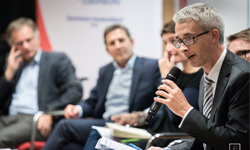 “Further reforms both at national and EU levels, particularly to complete the single market, are required to strengthen the EU recovery”, said BusinessEurope Economics Director James Watson at an event organised by the Austrian Federal Chamber of Labour on 19 September in Brussels. Held at the Austrian Permanent Representation to the EU, the event brought together speakers from the European Commission, Trades Union and business to consider policy measures necessary to strengthen the EU recovery. Emphasising the fact that most international institutions suggest that Europe’s long-term rate of sustainable growth remains well below 2%, Watson pointed out key messages of BusinessEurope Annual Reform Barometer. He noted that further reforms to labour and product markets, as well as efforts to support stronger investment, particularly in skills and innovation, are still required in many member states. They need to be complimented at EU level by policies to strengthen the European Monetary Union (EMU), complete the single market, mainly in relation to digital services, and to further improve the EU’s access to external markets through free trade agreements. Photo copyright: © Julie de Bellaing 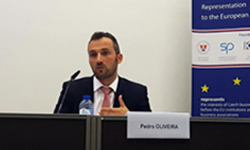 Consumer confidence in the EU is at a 16-year high which reflects in more cross-border shopping. The Consumer Law Fitness (REFIT) study and the 2017 Consumer Scoreboard show that overall compliance by traders with consumer rules is improving and that consumers are more satisfied with the way their complaints are dealt with. Going forward, the EU should continue to work towards better enforcement and awareness of rules. Legislative changes if needed should be targeted and under a full harmonisation approach. These messages where conveyed by Pedro Oliveira, Senior Adviser of BusinessEurope at the Seminar Fit for shopping?, Organized by the Czech Permanent Representation and CEBRE on 25 September in Brussels. 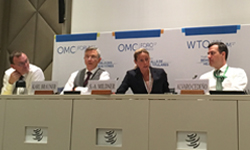 During the World Trade Organization (WTO) Public Forum in Geneva, which took place on 26-28 September, BusinessEurope organised a high-level working session entitled: "Can WTO promote sustainability and trade? - looking beyond the Doha Development Agenda". Panellists, representing the WTO, its members, businesses and trade unions, agreed that increasing income through trade, implementing effectively the Trade Facilitation Agreement and promoting global standards can contribute to sustainable development. BusinessEurope also had the opportunity to meet with a number of WTO members to discuss the agenda and the prospective outcome of the upcoming WTO Ministerial Conference, which will be held in December, in Buenos Aires. 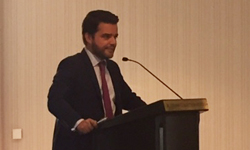 At a conference in Athens on 21-22 September on climate change mitigation technologies, jointly held by the European Patent Office (EPO) and the Hellenic Industrial Property Organisation, BusinessEurope Senior Adviser Ilias Konteas stressed the importance that BusinessEurope attributes to the patent system in order to mitigate climate change. He also highlighted some of the challenges companies that want to innovate in this field face when they move from idea to commercialisation. Cooperation through partnerships and an enabling policy framework are the way forward.

Modernising the Customs Union: beneficial for both the EU & Turkey 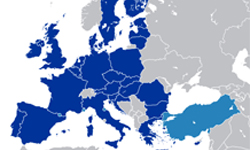 The Turkish Industry and Business Association (TÜSIAD) organised on 21 September in Istanbul the event “Global trade: from politics to policy”. Discussants focused on the current challenges and opportunities in the global trading environment, proposing solutions to address protectionism and the recent anti-globalisation rhetoric. Representing BusinessEurope, Sofia Bournou stressed the need for maintaining open markets and strengthening dialogue and cooperation among governments, businesses and the broader civil society. She highlighted that this is essential for identifying the right policy mix of trade and domestic policies that, on the one hand, will allow the growth of the economy while, on the other hand, will ensure a more equal distribution of benefits to all parts of the society. Part of the discussion was also dedicated to the modernisation of the EU-Turkey Customs Union Agreement. “The update of the Customs Union will have a positive impact both in economic terms – through an extended scope, covering for instance services and agriculture – as well as in political terms – offering a platform for deeper dialogue and collaboration between the EU and Turkey”, Bournou explained.

The future of plastics is with circular economy 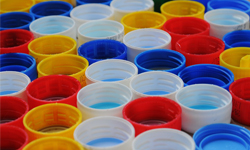 The circular economy has entered a critical phase as the EU Strategy on Plastics in a Circular Economy (Plastics Strategy) is set to be published by the end of this year. BusinessEurope is fully committed to the circular economy in Europe. In our position paper published on Tuesday 26 September, we call for policymakers to make use of the Plastics Strategy to boost innovation, create incentives for the use of recycled materials, promote circular designs, and harmonise rules.

Posting of workers discussions should focus on better enforcement 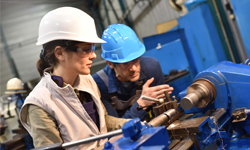 BusinessEurope met a delegation of the French National Assembly led by Typhanie Degois on 22 September 2017 in Brussels. A "posted worker" is an employee temporarily sent by his employer to carry out a service in another EU Member State. We provided explanation on why we oppose the proposed revision of the posting of workers directive. BusinessEurope believes the focus should be on better enforcement of the current rules to fight against illegal practices. The posting of workers directive should continue to facilitate mobility and one should not increase burdens for law-abiding companies. In particular, the proposal to change the law applicable to employment contract in case of a longer posting would lead to legal uncertainty for both employers and workers. 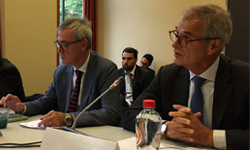 “Legislators are saying that the cross-sectoral correction factor will never happen. That is fine, but companies need certainty on that. The ambition is there, now we need to make sure that the best performers get enough free allowances to invest with confidence in low carbon technologies”, said BusinessEurope Energy & Climate Working Group Chairman Olivier Imbault at an event on the reform of the European Emissions Trading System (EU ETS), on 22 September in Brussels. Organized by the European Roundtable on Climate and Sustainable Transition (ERCST), the event gathered several EU negotiators, including from the European Commission and the Estonian Presidency. Imbault added that “Companies are ready to invest in low carbon technologies but are faced with all kinds of risks, including market developments and technical risk. They cannot deal with regulatory risk on top of that. We call on EU negotiators to looks at BusinessEurope’s positions in view of the next trilogue on 12 October” 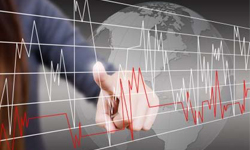 BusinessEurope issued a position paper welcoming the European Commission’s proposals to amend the European Market Infrastructure Regulation (EMIR). The retention of the hedging exemption and the decision to move to an asset-by-asset class assessment is crucial for the real economy. Existing exemptions for non-financial counterparties that use ‘over-the-counter’ (OTC) derivatives in conjunction with risk mitigation of underlying real economic risks should be maintained and the burdens that companies face due to the dual-sided reporting regime should be reduced.