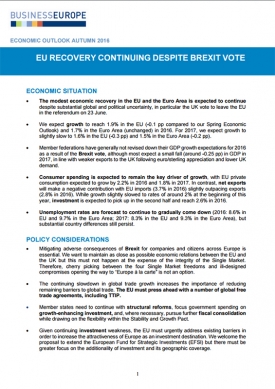 Released on 19 October 2016, BusinessEurope’s Autumn Economic Outlook shows that the modest economic recovery in the EU and Euro Area is expected to continue in the coming months with the UK's vote to leave the EU appearing to have not significantly damaged business confidence. Overall, we expect growth to reach 1.9% in the EU (-0.1 pp compared to spring) and 1.7% in the Euro Area (unchanged) in 2016. For 2017, we expect growth to slightly slow to 1.6% in the EU (-0.3 pp) and 1.5% in the Euro Area (-0.2 pp). Our moderate downward revisions for 2017 are particularly linked to the likelihood of both a slowdown in the UK economy and lower exports to the UK as the appreciation of the euro against sterling starts to impact. As noted in a special feature of the report, the UK’s decision to leave the EU represents a long-term risk to both the EU and UK economies given the profound interconnectedness of production.

* For the UK, we used figures from the IMF World Economic Outlook, October 2016