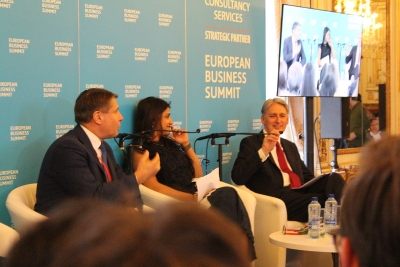 Speaking at the Closing Plenary of the European Business Summit after the keynote speech of UK Chancellor of the Exchequer Philip Hammond, on 24 May in Brussels, BusinessEurope Director General Markus J. Beyrer recalled that BusinessEurope and its member federations were instrumental in facilitating a political agreement on a status quo-like transition period to avoid a cliff-edge Brexit. "We are ready to continue playing a constructive role in the next phase of the negotiations. Time is running out and we need a full agreement on the proposed legal text covering the withdrawal and the transition issues. We also need more clarity on the future relationship", he said. Tata Consultancy CEO N. Ganapathy Subramaniam, and Huawei Deputy Chairman Ken Hu also participated in the panel discussion that followed.