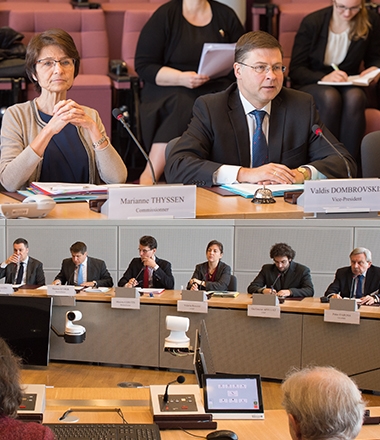 "The European pillar of social rights can be useful if it contributes to improving Europe's global competitiveness. BUSINESSEUROPE is willing to engage in discussions with the European Commission and trade unions on benchmarks as part of a renewed strategy on flexicurity. We share the objective of conceiving a pillar that drives the reform process at national level to achieve better performing labour markets and social systems",  BUSINESSEUROPE Director General Markus J. Beyrer said during a meeting of Vice-President Valdis Dombrovskis and Commissioner Thyssen with the European social partners, discussing their involvement in this initiative. "For business one of the key reasons of the growing divergence across Europe is the lack of or insufficient actions in some countries to address structural weaknesses on the labour markets. Making progress on labour market reforms will support the convergence of EU/EMU member states towards growth and employment", he added. Photo copyright: European Union 2016