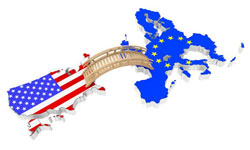 Just a week before the new round of TTIP - Transatlantic Trade and Partnership Agreement negotiations takes place in Brussels, the European Parliament has sent a strong and positive signal to TTIP negotiators. The TTIP resolution agreed by the EP on 8 July clearly demonstrates the European commitment to conclude an ambitious trade and investment agreement with the US. BUSINESSEUROPE President Emma Marcegaglia said: “Today’s vote in the European Parliament, together with the Trade Promotion Authority recently adopted in the United States, is a decisive step to move the TTIP negotiations forward. Negotiators should capitalise on this and step up their efforts in the coming rounds to ensure tangible results soon. We are optimistic that a political agreement, covering some of the main issues like tariffs, regulatory cooperation, public procurement or energy, can be reached during the Obama administration”. The EP resolution relates exclusively to TTIP negotiations and must have no bearing on other trade negotiations or agreements that have been already concluded. “The resolution adopted today expresses the views of the European Parliament on how to achieve the best outcome in the TTIP negotiations, but it cannot and must not have an impact on negotiations that the European Union is conducting with other trading partners and even less on agreements that are already concluded”, she added.