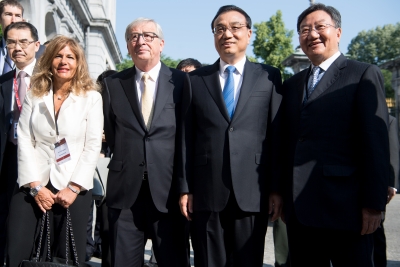 EU-China Business Summit: We have common interests - but rules must be respected

At this year's EU-China Business Summit 2017 in Brussels, leaders have expressed their strong common interests, namely to improve mutually beneficial trade relations. But the summit was also an opportunity to exchange clear words. BusinessEurope President Emma Marcegaglia stressed that rules are an important tool against market distortions. She warned that Chinese production overcapacity caused an impact on European business. China's Prime Minister Li Keqiang underlined that investment by European countries in China would continue to increase substantially despite slower growth in China, while European Commission President Jean-Claude Juncker said: "Our joint leadership provides businesses, investors and researchers – in Europe, China and around the world – with the certainty they need to build a global low-carbon economy." But he also warned: "Roughly half of EU companies say that it actually got harder last year. One in two say they feel less welcome than when they entered the Chinese market. And more than half say that foreign companies are treated unfairly compared to their Chinese competitors."