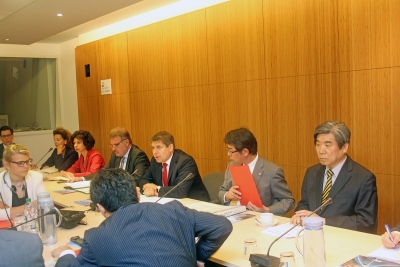 Opening the event, Markus J. Beyrer said: “This shows our joint commitment to regulatory dialogue and regulatory cooperation that is so important in the EU-Japan trade and investment relations. Japan and the EU have a lot to share and to learn from each other. This meeting enables an open exchange and understanding of each other’s positions. Hopefully this will have a positive impact on the current negotiations of a free-trade agreement between the EU and Japan”. The automotive, chemicals, digital and railway sectors participated in the meeting. Antti Peltomäki, Deputy Director-General of DG Grow, and Kazuo Kodama, Ambassador of the Mission of Japan to the European Union, represented the European Commission and the Japanese government respectively. The Japanese delegation was headed by Akira Shimizu, Chairman of Planning & Coordinating Sub-Committee, Committee on Europe of Japan Business Federation Keidanren. At the end of the meeting, BusinessEurope and Keidanren issued a joint release. Photos