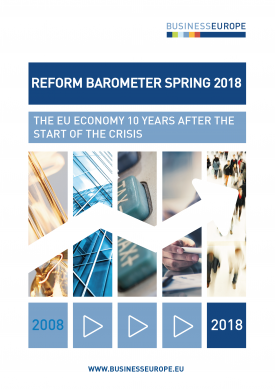 BusinessEurope Reform Barometer Spring 2018 - The EU economy 10 years after the start of the crisis
2.58 MB | 21/03/2018
Facts and figuresReports and studies

BusinessEurope’s EU Reform Barometer 2018 "The EU economy 10 years after the start of the crisis", published on 21 March 2018, shows that the EU needs to do more to improve competitiveness, with EU output only 9% above pre-crisis levels, compared to 15% in the USA and 18% in Canada.

2018 marks 10 years since the start of the financial crisis. This year’s Reform Barometer looks at how the EU has performed relative to its global counterparts in the years that followed the crisis. In addition, it contains our annual survey of our 39 member federations regarding progress on structural reform.

The key findings of our report include:

Against this background, it is disappointing that our survey of member federations shows that there remains a lack of urgency among member states to put in place the growth-enhancing reforms recommended by the EU, with only 22% of reforms considered satisfactorily implemented in 2017.

Detailed assessments by national member federations of progress on the country-specific recommendations (CSRs) issued by the European Commission can be downloaded below.