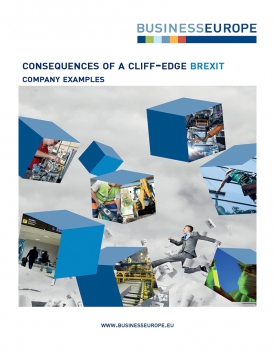 Consequences of a cliff-edge Brexit

The Single Market has enabled European and British companies to set up complex supply chains and close-knit partnerships that benefit competitiveness, growth and employment in both economies. With so much at stake, businesses are naturally concerned about the final outcome of the negotiations between the EU27 and the UK.

The worst possible outcome for business would be a no-deal “cliff-edge” Brexit. Business wants to avoid this. And companies need certainty and time to prepare and adjust to the post-Brexit situation. However, with time pressure rising, this possibility, although undesirable, is not entirely implausible.

A cliff-edge scenario would mean that as of the 29th of March 2019, the UK would not only cease to be a member of the European Union, but would also leave its Single Market and its Customs Union. In this case, the UK and the EU would have to trade on WTO terms.

What would this cliff-edge scenario mean for European businesses? This publication seeks to answer this question from the concrete perspective of individual companies.

The cases in this brochure all stem from input by small and large companies that currently operate both in the EU27 and in the UK, spanning both manufacturing and services sectors. Though the examples are anonymised, they all illustrate real-life, non-fictional company cases.

The examples showcase how EU legislation facilitates concrete business operations between the EU27 and the UK today. They also indicate the potential impact of a cliff-edge scenario where all of these provisions cease to apply to the UK on the 29th of March 2019.

Cross-cutting areas of concern highlighted by multiple companies include sudden imposition of costly and time-consuming customs checks at the UK-EU border, decreased mobility of employees, duplication of certification procedures, and disruption of the level playing field through regulatory divergence.