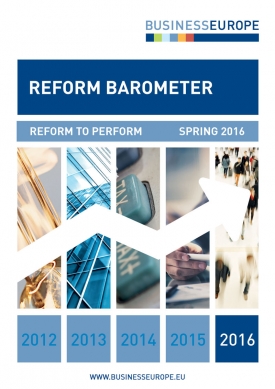 BusinessEurope's Reform Barometer, published on 3 March 2016, raises concerns that 'reform fatigue' may be setting in as the EU economy starts to extend its recovery from economic crisis. Results from BusinessEurope's member federations show that only 20% on the European Commission's recommended national-level reforms have been followed by satisfactory implementation, compared with 22% in 2015.

However, comparisons with other leading economies underline that structural reforms are urgently required to boost growth and strengthen public finances:

In addition, we consider in detail the Commission's investment plan one year on, and note that important steps have been taken with the launch of the EFSI and key strategies for the internal market, trade, energy and capital markets. But much more needs to be done in terms of implementing concrete measures to bring barriers to investment down.

A special chapter also looks at implications of population ageing. With ageing in the EU projected to be much more dramatic than in the USA in the coming years (e.g. in the EU the old-age dependency ratio will increase from 29% at present to 54% in 2050, whereas in the USA the ratio is expected to increase from only 22% to 37%), this increases the urgency of policy reform in areas such as pensions, labour markets, lifelong learning and fiscal consolidation.