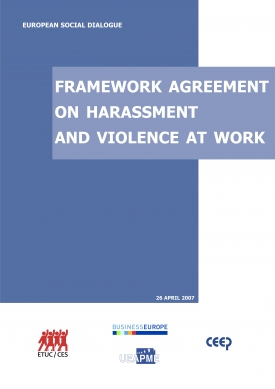 On 26 April 2007, in the presence of Commissioner Spidla, the secretaries general of ETUC, BUSINESSEUROPE, UEAPME and CEEP officially signed an autonomous framework agreement to fight against harassment and violence at work. Negotiated during ten months, the text commits the members of the signatory parties to combat all unacceptable behaviour that can lead to harassment and violence at the workplace.