Fredrik Persson to succeed Pierre Gattaz as President of BusinessEurope 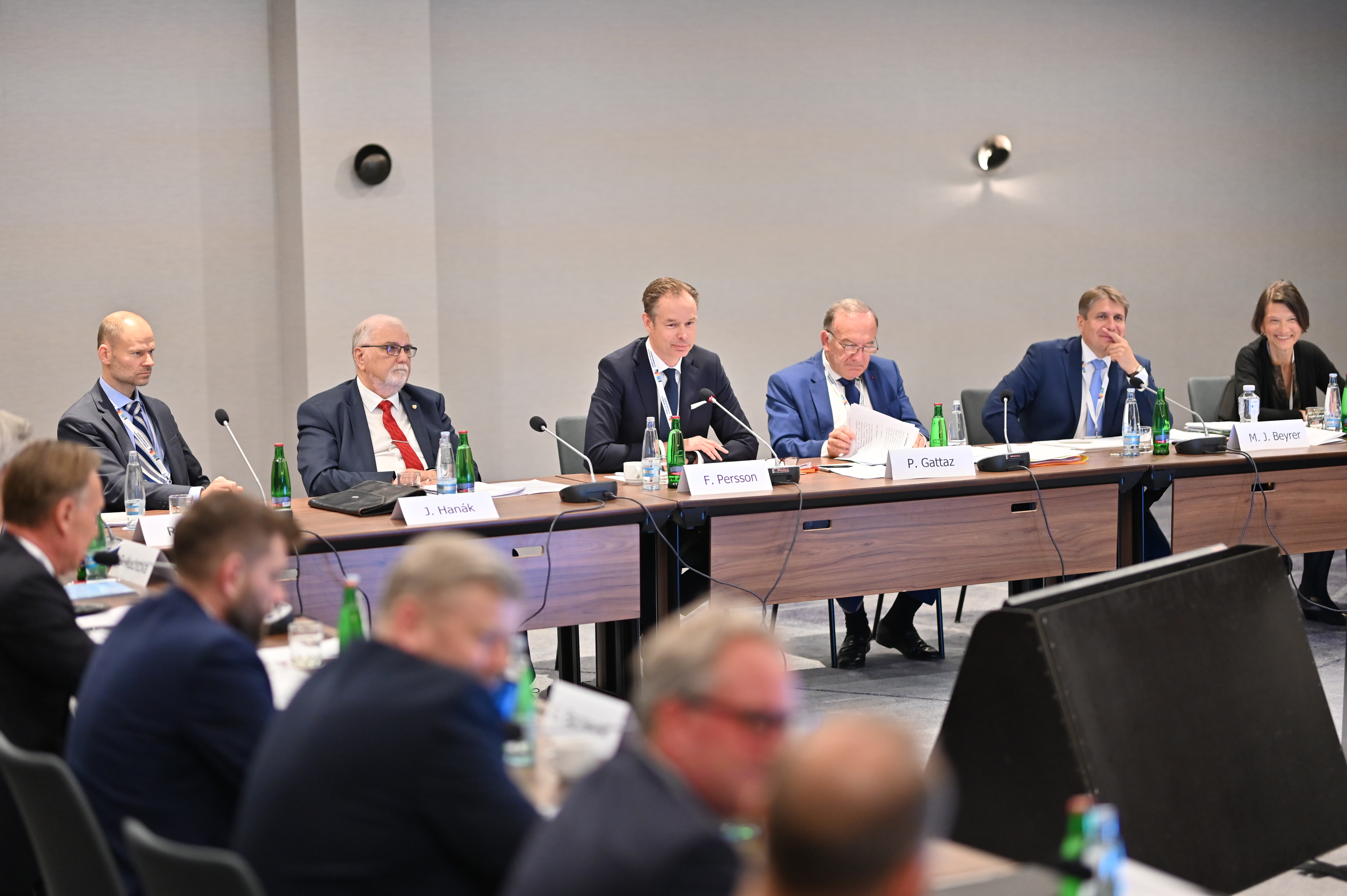 During its meeting in Prague today, the Council of Presidents of BusinessEurope unanimously elected Fredrik Persson, who was until recently President of Swedish Enterprise (Svenskt Näringsliv) and is President of Ellevio AB as well as of JM AB, to succeed Pierre Gattaz as President of BusinessEurope from 1 July 2022. He is elected for a period of two years, renewable once. Fredrik Persson said: "I look forward to pursuing the great work of Pierre Gattaz and to strengthening the voice of the millions of small, medium and large companies in Europe that the 40 member federations of BusinessEurope represent. It is fundamental that the EU pursues an ambitious competitiveness agenda to deliver wealth for its citizens and to manage the transition towards a sustainable future, building upon a strong EU single market. Taking up the important position at this critical period in European history is a major responsibility and a true honour." Read our press release. See also biography of Fredrik Persson - Photo copyright: Sören Andersson

DG Beyrer debates on the EU economy at EPP Congress 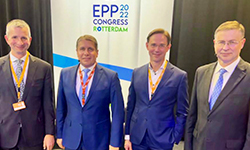 On the invitation of the newly elected President of the European People’s Party (EPP) Manfred Weber, BusinessEurope Director General Markus J. Beyrer spoke at the EPP Congress in Rotterdam on 31 May. He debated with the European Commission Executive Vice-President Valdis Dombrovskis on how to make the European Union economically more resilient. Beyrer reiterated our call not to overburden companies in these times of severe crises, and to bring home already negotiated free trade agreements, such as with Chile, Mexico and Mercosur. He also supported a European chip strategy, whilst warning not to enter a subsidy spiral and create the over-capacities of tomorrow. Beyrer congratulated outgoing EPP President Donald Tusk on his great work over the past years. 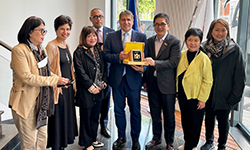 The visit to BusinessEurope of a delegation of Kadin, the umbrella organisation for business in Indonesia, was an opportunity to discuss EU-Indonesia relations and how the  business community can work together to support and give new impetus to the ongoing bilateral trade negotiations. “European businesses support stronger and closer trade and investment ties between the EU and Indonesia. The current geopolitical context makes it even more important for European companies to diversify markets, and ASEAN (Association of Southeast Asian Nations) countries are a priority”, said Markus J. Beyrer, Director General of  BusinessEurope. During the discussion with the Chairman of Kadin, Arsjad Rasjid and the Vice-Chair and B20 Indonesia Chair Shinta Kamdani, there was an agreement to increase bilateral cooperation between BusinessEurope and Kadin and work together with the aim of making EU-Indonesia trade negotiations progress faster.

How to make SMEs competitive in the digital age: exchange with Executive Vice-President Vestager 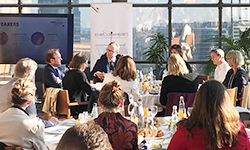 Digitalisation can be a huge enabler for SMEs. BusinessEurope shares the objectives of having the EU framework that ensures the digital Single Market, but underlines that more engagement with stakeholders is needed. “If SMEs are not consulted properly because of the current fast pace of heavy legislation in the digital domain, this may result in significant unintended consequences such as increased burdens and compliance costs, which will eventually deny them the opportunities of faster digital transition”, said BusinessEurope’s Director for Internal Market Martynas Barysas during an SME Intergroup breakfast at the European Parliament on 1 June organised by MEP Martina Dlabajová. The European Commission’s Executive Vice-President Margrethe Vestager also participated at the event. “If we want SMEs to be competitive in the digital age, any attempts to improve the regulatory framework should be made having in mind the fact that it is all about free cross-border trade in digital services, technologies, digitally enabled products on the Single Market. Likewise, it is crucial to monitor how our ties with major international trading partners are maintained to ensure the market access for SMEs“, Barysas concluded. 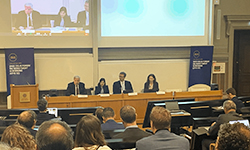 Speaking about the role of the private sector in fostering a responsible investment environment, BusinessEurope Senior Adviser for International Relations Sofia Bournou stated that “when European companies invest, they do not only support the creation of jobs or growth. There are contributions beyond the strictly economic sphere, very much related to the companies’ values and standards”. She participated at the annual CELIS Institute Forum on Investment Screening that took place this week in Uppsala, Sweden. Bournou added that abiding by the rule of law and democratic principles, promoting social and environmental sustainability through responsible business conduct and robust management systems is a key role and responsibility of the private sector. The global trading environment becomes more challenging also when it comes to the trade and security agenda, which is relevant for issues such as investment screening and export controls. “We have increasing tensions between different economic models but also geopolitical tensions, which impact developments. The EU’s foreign investment screening framework came in this context“, she stated. BusinessEurope supports a calibrated, risk-based approach that respects the balance between achieving legitimate security and public order objectives, while maintaining an open and welcoming environment in the EU. This is reflected in the EU’s regulation that is being implemented for more than a year now.

Upcoming proposal on forced labour: how to strike the right balance 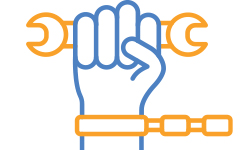 “European businesses reject and condemn forced labour fully. This is a very important issue when we discuss about due diligence more broadly, as we increase our understanding of the problem and consolidate our efforts to identify and mitigate it”, said Sofia Bournou, BusinessEurope Senior Adviser for International Relations at an event on forced labour organised by the Dutch Ministry of Foreign Affairs and the Permanent Mission of the Netherlands to the EU on 31 May. BusinessEurope is currently preparing its input for the European Commission, which is in the process of developing a legislative proposal, which we understand will be a marketing ban of products, produced domestically or imported, in the EU market. “What is important to achieve in the legislation is the balance between the State’s duty to protect human rights, including forced labour of course, and the businesses’ obligation to respect human rights”, she highlighted. Bournou added that Businesses cannot replace the State but can help make a difference on their ground through their economic and competitive leverage. “The EU needs to step up its efforts and engage with partners at a State-to-State level”, she argued. It was also pointed out that all the different pieces of legislation related to due diligence, such as the Corporate Sustainability Due Diligence Directive, legislation on deforestation and the upcoming proposal on forced labour, need to work well together and avoid duplications that would increase discrepancies and implementation costs.