Future of the emissions trading system and industrial competitiveness in Europe 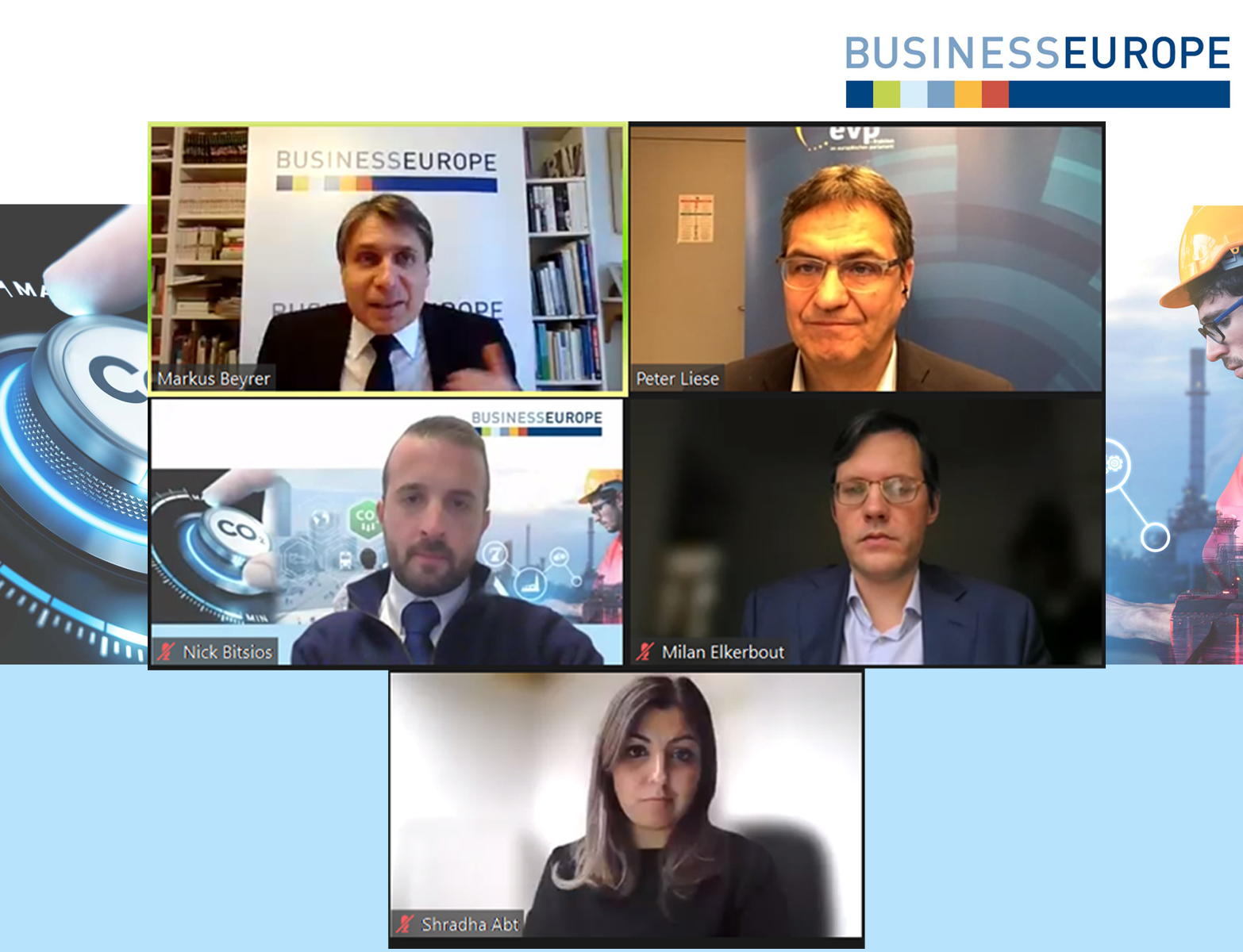 How do we increase our climate ambition without putting too much cost pressure on companies? How do we preserve competitiveness in an era of escalating carbon costs? These were some of the questions discussed at the online event “The future of the emissions trading system (ETS) and industrial competitiveness in Europe”, on 9 February. BusinessEurope Director General Markus J. Beyrer pointed out that the European Commission proposal on the ETS review is in need of some significant changes. “I hope that the concern for ensuring industrial competitiveness and preserving the ability of companies to invest in low-carbon technologies, including through sufficient free allowances, remains present on the minds of lawmakers”, he said. Beyrer added that leaders shouldn’t pile more and more pressure on industry, eroding our industrial base, in an effort to fully shield private consumers from the costs of the transition we all have to face. The event also featured MEP Peter Liese, the ETS Rapporteur. He pointed out that his proposal for a Carbon Leakage reserve would add certainty to the transition from free allowances to ETS while still being compatible with WTO rules. Shradha Abt-Bhatnagar, Senior Manager Energy and Climate Policy and Deputy Head of Brussels Office at BASF underlined the efforts Europe’s largest industrial players are already undertaking to decarbonise, but also argued for sufficient carbon leakage protection in the transition period. Milan Elkerbout, Research Fellow at CEPS, called for a targeting free allowances in the interest of innovation by introducing a zero-emission benchmark.

BusinessEurope Director General Markus J. Beyrer explains what has changed since the last edition of the forum in November 2017 and what is needed to boost economic ties between the two continents.

What are the challenges that companies face and the measures they take to adapt? What do they need from policymakers? Senior Adviser Sofia Bournou talks about the results of our latest survey among members. We also invite you to read our paper.

EU needs to get bilateral trade agenda back on track 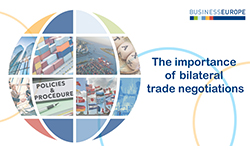 On 7 February, BusinessEurope sent a letter to the European Commission Executive Vice-President Valdis Dombrovskis and to the French Minister Delegate for Foreign Trade Franck Riester calling for renewed momentum to the EU’s bilateral trade agenda. A range of level playing field initiatives have now been launched, but these initiatives need to go hand in hand with the EU’s negotiating agenda, which aims at creating more and better global market access for European companies. Regarding the EU’s negotiating agenda, progress has been less visible in the past couple of years. The multilateral track has its difficulties, and while we applaud and support the EU’s persistent efforts to get the multilateral trade agenda back on track, we also have to acknowledge that not everyone is doing their fair share of the lifting. Therefore, the EU needs to step up its efforts on the bilateral trade agenda, as this is an area where we ourselves can move forward with willing trading partners. In that regard, the EU needs to present itself as a reliable partner. Its ability to open new opportunities and markets for European exports is of strategic importance and will help strengthening the EU’s resilience. This is more needed than ever in light of current geopolitical tensions. By providing a platform for dialogue and regulatory cooperation, trade agreements also offer an additional opportunity for the EU to help drive up standards globally and achieve sustainability objectives in a constructive and efficient manner. 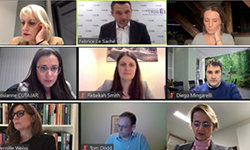 Next month the European Parliament’s Legal Affairs Committee will vote on the Corporate Sustainability Reporting Directive. During a discussion on sustainability reporting of the European Parliament’s SME Intergroup on 8 February, the Chair of BusinessEurope’s Entrepreneurship and SME Committee Fabrice Le Saché pointed out that the business community is fully committed to sustainability and understands the needs and expectations for more transparency and communication on business activities and impacts. However, while some of our concerns are shared by MEPs, there are also moves to make the requirements more detailed and to extend the scope of the legislation to smaller companies. “This is a large concern for us. We call on MEPs to consider the interest of companies, and SMEs in particular, and to work together to find good compromises which will allow the directive to reach its objectives in a proportionate and workable way”, he said. The event, co-hosted by the Intergroup and BusinessEurope featured the participation of the Intergroup’s Co-Chairs MEP Angela Winzig and MEP Martina Dlabajová, in addition to several other Members of the European Parliament, representatives of the European Commission, business and entrepreneurs. “All ongoing initiatives - from future rules on corporate governance and due diligence, taxonomy, and sustainability reporting - must fit together, not overlap and not reduce the resources available to companies. Companies should not be put in the position of having to interpret unclear legislative requirements under unrealistic timelines”, Le Saché concluded. 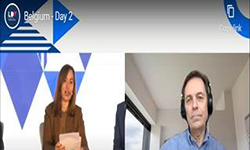 “For a successful green and digital transition, we need to maintain jobs, companies and a competitive Europe. Political ambition and determination to a climate-neutral economy is no reason to overlook challenges and transition costs”, said Kari Hietanen, BusinessEurope’s representative in the EU Industrial Forum, speaking in a panel discussion on how to support the twin transition of EU industrial ecosystems on 9 February, during the EU Industry Days. The panel featured the participation of the curator of the European Commission taskforce on industrial ecosystems, and representatives from German and Portuguese ministries. “The twin transition needs support of all parties. If we want to aim at a competitive Europe, it is key to focus on the elements identified in the proposed blueprint for transition pathways, such as investment, skills, research, regulation fit-for-purpose and SMEs”, Hietanen concluded. 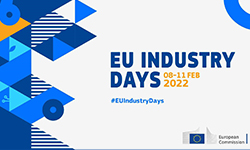 At the EU Industry Days session on Single Market barriers on 9 February, in a panel with the European Commission and Member States, BusinessEurope made a strong plea in support of the Single Market freedoms and stressed the necessity to bring the very notion of free trade back to the top political narrative. Martynas Barysas, Director for Internal Market at BusinessEurope, gave an overview of the types of Single Market barriers that companies face, also quoting concrete examples collected from the members. While acknowledging that progress is visible on the Digital Single Market (though there are also shortcomings and the final outcome of some new initiatives is yet to be seen), overall, the removal of Single Market barriers has been very limited and the Single Market is not among the top priorities in the EU today. Moreover, even some new legislative proposals from the Commission deviate from the Single Market principles which gives additional reasons for concern that the EU lacks a “Single Market proofing net” at institutional level. “The very notion of free trade within the EU is somewhat lost in the political narrative of today”, Barysas said. He added that “improvements in the Single Market governance and implementation of existing rules are crucial, however this is not enough.” Therefore, and to successfully deliver on the twin transition, “BusinessEurope speaks of the need to further open the markets for which we need a political impetus. To start with very simple steps, first the Commission could use its report on single market barriers and name concrete actions to address each of the identified barriers in its annual work programs”, he stated. 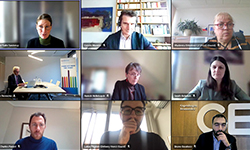 On 9 February, BusinessEurope brought together national and sectoral employers organisations, representatives of governments and the European Parliament to debate employment status and the implications of a rebuttable presumption of employment. The key message passed by Maxime Cerutti, BusinessEurope Director for Social Affairs, was that a rebuttable presumption of employment is the wrong policy approach at EU level as it does not improve legal certainty, creates negative economic and administrative impacts, and encroaches in diverse labour law solutions and industrial relations practices in the Member States. He added that “we need to deal with issues regarding working conditions of platform workers where they exist, but not by making them all employees – we need to also allow platform workers to be self-employed if it accurately reflects the way they work”. Speakers highlighted that there are already good systems in place in a number of countries, which can be a viable alternative to a rebuttable presumption of employment. The views of 16,000 delivery couriers on what platform work offers to them were also presented, collected in a study by Copenhagen Economics. 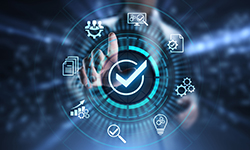 On 8 February, BusinessEurope’s Free Movement of Goods Working group hosted Sophie Mueller, Acting Head of Unit on Standards Policy at the European Commission's Directorate for the Internal Market, Industry, Entrepreneurship & SMEs (DG GROW), for a first exchange on the newly published Standardisation Strategy. Members of this working group had the opportunity to clarify several aspects of the standardisation package, notably regarding the practical implications of the proposed changes to the governance of the European Standardisation Organisations and the alignment of standards with the EU’s political priorities. BusinessEurope will further assess the Standardisation Strategy Package in the coming weeks and will work with industry partners to promote a reliable, inclusive, and market-driven standardisation environment in Europe. Read our Press Release on the standardisation strategy package.

Directive for a high common level of cybersecurity in the EU (NIS2): key points for business 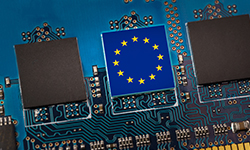 BusinessEurope signed a joint industry letter together with DigitalEurope and Orgalim on the trialogues of the Directive for a high common level of cybersecurity in the EU (NIS2). As the negotiations progress, our associations representing businesses of all sizes and a variety of industry sectors have come together and highlighted four key points that will enable the business community to swiftly comply with the new law. We need: risk-based approach and more clarity on which entity is critical to fall into scope; a 72-hour deadline for incident notification; cybersecurity certification in line with the Cybersecurity Act (CSA);  and consistency with sectorial laws. To achieve the proposal’s aim of tackling the limitations of the current regime and achieving a more harmonised level of cybersecurity, the final text must be clear and reliable.