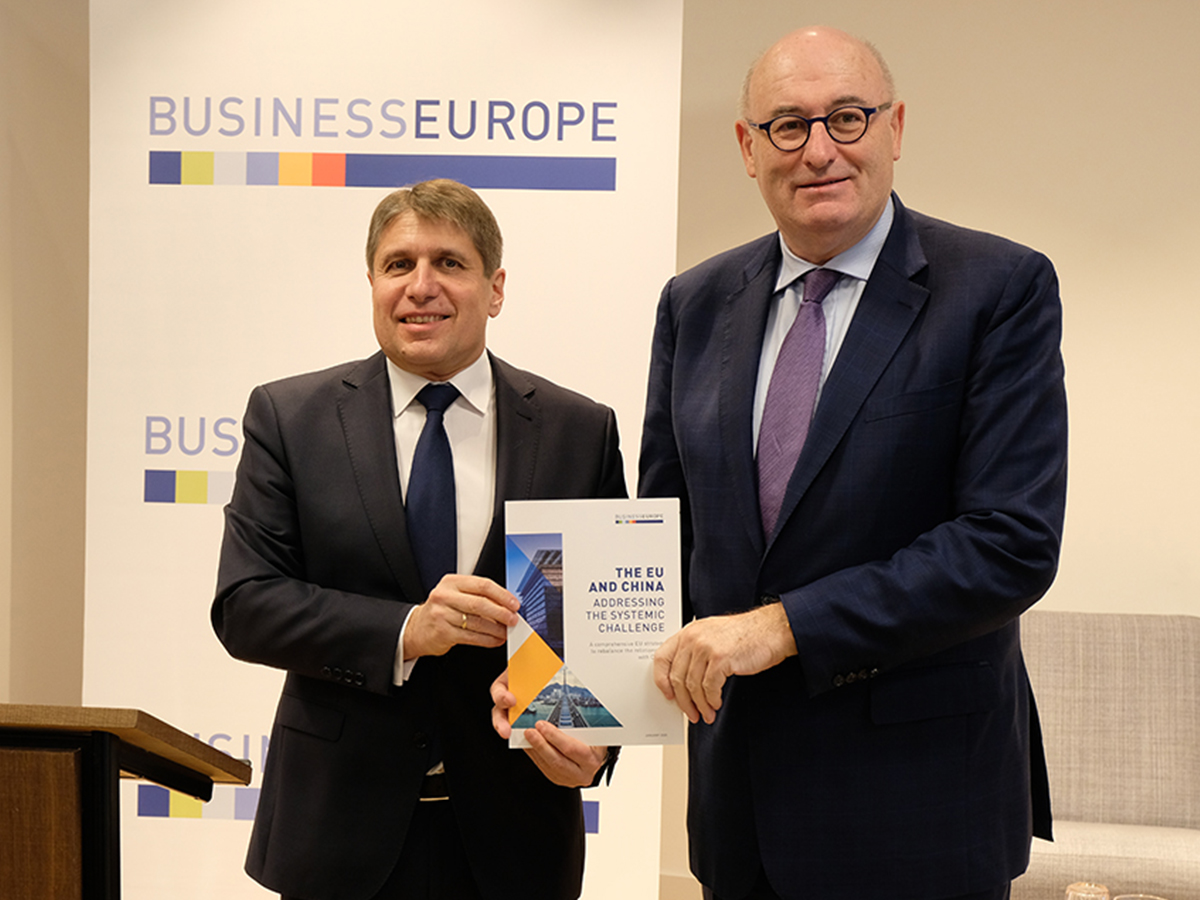 “The voice of business must be heard when it comes to framing a coherent European strategy for dealing with China,” said the EU Commissioner for Trade, Phil Hogan, on 20 January at BusinessEurope’s launch event of the new strategy paper “The EU and China: Addressing the Systemic Challenge”. Commissioner Hogan welcomed BusinessEurope’s comprehensive outlook on the challenges posed by China’s state capitalism as well as the 130 detailed recommendations included in the paper. BusinessEurope’s Director General Markus J. Beyrer offered Commissioner Hogan a copy of the strategy paper, thanking him for his continuous support for the European business community. Beyrer stressed that the EU needs to secure a level playing field between the EU and China, not just by reforming the World Trade Organisation (WTO) but also by taking additional measures on bilateral trade and investment, public procurement, protection of intellectual property rights, standardisation, energy and climate. He argued that China’s government-induced market distortions ought to be addressed as the EU looks into state-owned enterprises (SOEs), industrial subsidies, overcapacity, competition policy and state aid. Finally, Beyrer highlighted how deepening the Single Market, developing an ambitious industrial strategy, investing in research and development and fostering innovation may put the EU back on track to become competitive in the global innovation race. This launch event was complemented by an additional promotional event on 22 January, co-hosted by the Member of the European Parliament Reinhard Bütikofer at the Representation of the State of North Rhine-Westphalia to the EU. This event, attended by about 200 people, had the participation of Sabine Weyand (Director General, DG Trade), Fabian Zuleeg (Chief Executive, European Policy Centre), and Sabine Stracker-Kellerer (SSK Asia + MERICS). They discussed BusinessEurope’s paper after it was presented by Luisa Santos and Maurice Fermont from the International Relations Department. See the photo albums of the event on 20 January and the one on 22 January. 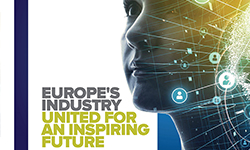 The Alliance for a Competitive European Industry (ACEI), of which BusinessEurope is a member, has identified a vision for Europe’s industry and EU policymakers to work on together in the next five years. The aim is to create a strong and integrated Europe that creates jobs, promotes innovation, and simultaneously addresses climate change and sustainability. Read the publication. 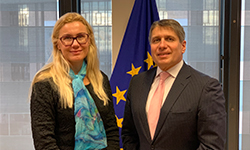 “What happens in the next five years will be key to increase the chances of reaching climate neutrality by around mid-century. Doing so will require everyone – businesses, governments and civil society – to step up their efforts”, highlighted Markus J. Beyrer, Director General of BusinessEurope, in a meeting with the European Commissioner for Energy Kadri Simson on 21 January. “Some estimate that the low-carbon energy transition might result into a 3-4 times electricity demand increase by 2050 for industry alone. The decarbonisation process presents its challenges, not only does low-carbon energy need to be widely available but also affordable”, Beyrer added. He stressed that Europe will need to present a comprehensive industrial strategy that will attract the adequate level of investments to allow industry to stay and grow in Europe. In line with BusinessEurope’s energy and climate strategy, the Commission will need to attract other major economies to join in our ambition. 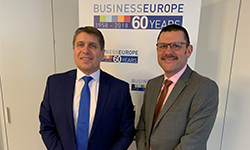 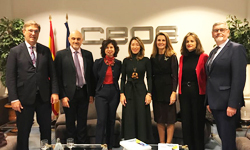 BusinessEurope members met on 23 January in Madrid to discuss the latest developments on the international trade agenda. The meeting was hosted by CEOE, the Spanish business confederation. The main topics in the agenda were the International Procurement Instrument, the role of the Chief Trade Enforcement Officer, Africa and the relationship with our two major trading partners, the USA and China. The meeting was a good opportunity to discuss the trade priorities of the Spanish Government, as the Secretary of State for Trade, Xiana Méndez, also participated. BusinessEurope highlighted that ”the EU needs to maintain a pro-active and strategic trade agenda actively defending rules-based trade while concluding bilateral agreements in fast growing regions around the world, namely in Latin America and Asia. We need to defend European interests in an increasingly polarised world”. Participants also had an opportunity to learn about Ibero-American business opportunities in a dedicated seminar.

Presenting views on “1in-1out” in the Council 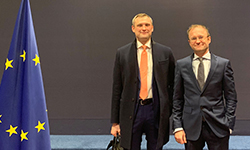 Most recently, the new President of the European Commission, Ursula von der Leyen, announced that the Commission will apply the “‘1in-1out’ principle to cut red tape. This will require the commitment and active engagement of all EU institutions. If well designed and effective, 1in-1out could help advance the EU’s Better Regulation agenda, improve coherence and quality of EU legislation, and simplify it. However, there are still a number of risks and unanswered questions in relation to the actual application of such a principle. These were the main messages presented by Christoph Bausch, Chair of BusinessEurope’s Better Regulation Working Group, and Martynas Barysas, BusinessEurope Director for Internal Market, on 17 January in the Council during a meeting of the Council Working Party on Better Regulation. Barysas welcomed the Commission’s awareness of regulatory costs and burdens and overall objective of their reduction. He noted that it should not be a stand-alone initiative but a complementary tool alongside further development of existing EU better regulation eco-system, including impact assessments, public consultations, ex-post evaluations, regulatory scrutiny and oversight. Regarding the scope of 1in-1out, Barysas underlined the need for a broad scope which captures both administrative costs and compliance costs. For the principle to deliver and stay credible, transparency on gold-plating at national level is important, and equally the 1in-1out should not become a tool dismantling some beneficial harmonised EU Single Market rules or undermining the overall Better Regulation agenda. The meeting stimulated a constructive exchange of views and was well-received by members of the Working Party. BusinessEurope representatives stressed their readiness to continuously engage in a constructive dialogue on this complex issue that still needs a lot of clarification. 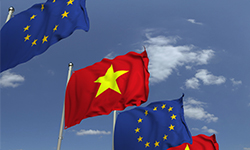 BusinessEurope, the European Services Forum (ESF), EuroChambres and SMEunited published a joint statement on 21 January to reiterate their support to the EU-Vietnam trade and investment agreements. The following day, the International Trade Committee (INTA) of the European Parliament backed the agreements, which shall remove virtually all tariffs between the two parties within ten years. It also aims at protecting European products, allowing Europe to access the Vietnamese public procurement market, and protecting the environment and further social progress in Vietnam. The joint statement highlights that supporting the EU-Vietnam agreement means supporting European values – of open trade, high labour and environmental standards, and protection of human rights. “At a moment where some of our traditional partners seem determined to part ways and embrace protectionism, it is more urgent than ever that the EU continues to develop the highest standard bilateral trade and investment agreements in the world. If the EU wants to be geostrategic, it needs to have a stronger presence in Asia and this agreement is key to attain this objective”. An agreement with Vietnam would be the first comprehensive agreement that the EU concludes with a developing country. “In a region marked by strong political and economic ties with China, an EU-Vietnam FTA would allow the EU to further expand, defend and promote its values, norms and standards in the region”, the statement points out. The European Parliament is now set to vote on the trade deal and the investment protection agreement at its February session in Strasbourg.