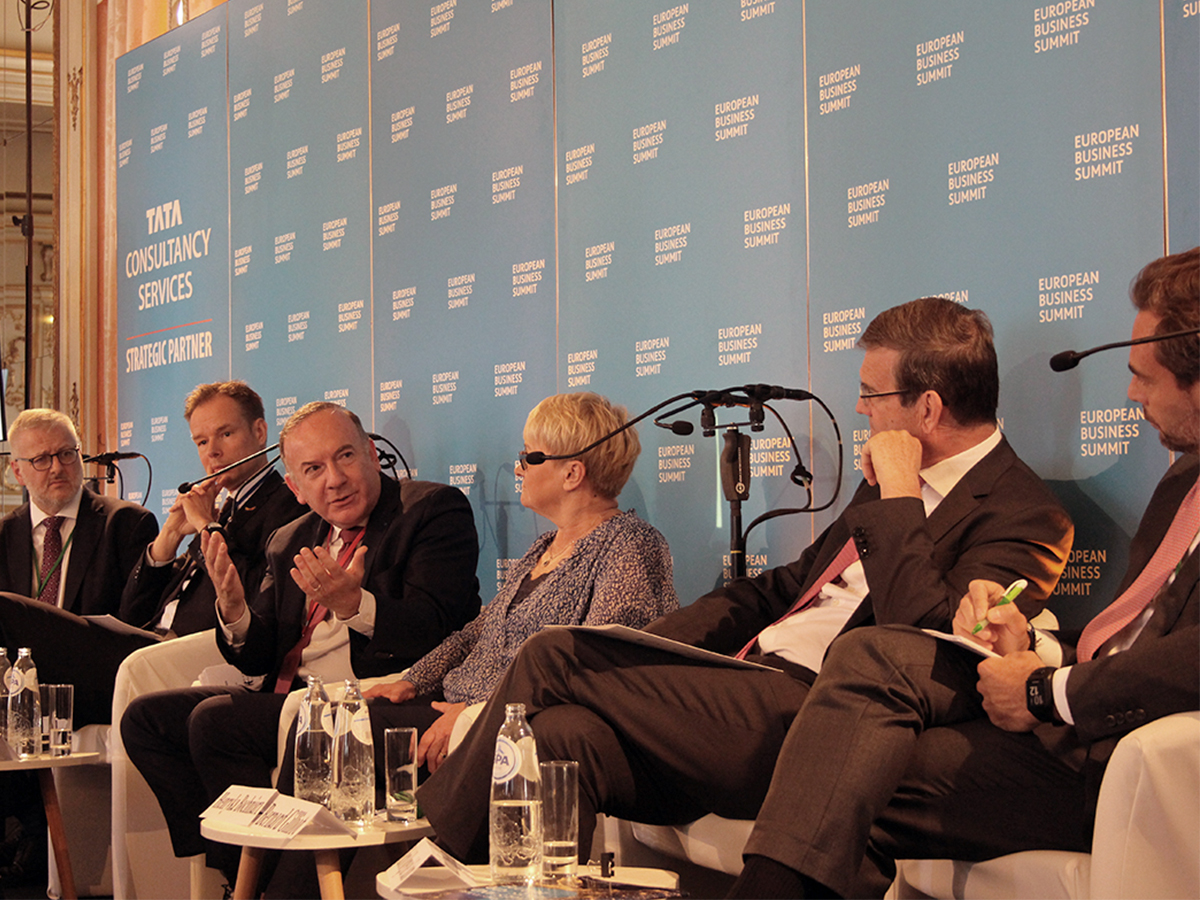 “Europe’s achievements should not be taken for granted. It is crucial to mobilise voters and we call on the business community and on citizens to cast their vote in the upcoming European elections”, said BusinessEurope President Pierre Gattaz, speaking at BusinessEurope’s high-level debate on 7 May at the European Business Summit (EBS) in Brussels. This two-day event counted 1740 attendees, 178 speakers, 44 sessions and 115 journalists. BusinessEurope organized the debate “Europe is Voting: Make it Your Business”, where President Gattaz spoke together with Henryka Bochniarz (President of Lewiatan), Bernard Gilliot (President of VBO-FEB), Fredrik Persson (President of the Confederation of Swedish Enterprise) and Ricardo Borges de Castro (Adviser at the European Political Strategy Centre of the European Commission) about the importance of the upcoming European elections in May 2019. In order to reach BusinessEurope’s Ambition for Europe in 2030, the speakers laid out priorities for Europe, such as the single market, trade system, financing, industrial strategy, research and innovation, as well as education and skills development.

The United States: partner or rival? 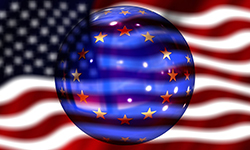 The bilateral economic relations between the EU and the USA have been negatively affected by a number of factors in recent months that are putting a strain on the transatlantic relationship. While the USA continues to be one of the most important commercial and investment partners of the EU, and the transatlantic economy continues to be the most integrated in the world, irritants have increased both in number and in intensity. The list includes additional tariffs on aluminium and steel, repeated threats of imposition of measures based on national security, and most recently, US sanctions adopted on the basis of the Libertad Act. These irritants share one common trait: they are unilateral measures adopted by the USA that have a considerable impact on EU companies. Furthermore, the USA is not engaging constructively at the multilateral level on issues ranging from the reform of the rule-making function of the WTO to avoiding the paralysis of its dispute settlement mechanism.

These choices confirm a general trend whereby the USA follows a unilateral path, careless of both the non-effectiveness of the measures in place in addressing actual root causes of problems and the impact said measures have on US allies and bilateral relationships. In fact, this Administration is not thinking or behaving in terms of “strategic allies”, something that makes Congress uneasy. The current state of play cannot be downplayed by being labelled as being “only narrative” as the US actions are quite real and impactful. Finally, the USA is also an economic competitor to the EU.

Time may have come for a more segmented analysis of our relationship with the United States. The EU needs to make a candid acknowledgement of irritants already in place, threats that may materialise in the future, and opportunities for better cooperation. This would allow crafting a positive agenda with objectives for both the short and the long term that are either attractive enough for the USA to refrain from imposing further measures or able to offset the negative impact of future measures - as it seems that even the renegotiation of an agreement like the United States–Mexico–Canada Agreement (USMCA) has not sheltered Canada and Mexico from unilateral US actions.

The challenge currently facing the EU is to devise a long-term strategy that goes beyond the search for shelter from immediate threats like Section 232 measures, or measures Washington may impose following the World Trade Organisation (WTO) disputes involving Airbus and Boeing. Economic operators are understandably extremely concerned with these possibilities. However, this must not prevent the EU from adopting a wider perspective that also includes a forward-looking strategy to the USA. The EU must be in for the long game.

The recent adoption of two mandates for two separate tracks of negotiations, one for an agreement on industrial tariffs and one for an agreement on conformity assessments, allow us for a cautious hope that an EU-USA dialogue would provide for a temporary push-back of further threats, and the decision to put off reciprocal measures in relation to Airbus and Boeing WTO disputes, something that would only benefit China.

There are two main hindrances: the first is that the USA and the EU mandates on industrial tariffs are very far apart, with unclear possibility of real success. The second is that there is a concrete possibility that as soon as the USA concludes its negotiations with China, and the USMCA passes Congress, the USA will have a renewed and increased capacity to redirect its attention to the EU and to the trade deficit that is still Trump’s main concern.

Rebalancing relations with the USA stands higher chances if a channel for dialogue is open, negotiations starting on conformity assessments have an incremental approach, and EU-USA cooperation on China is part of the discussions. 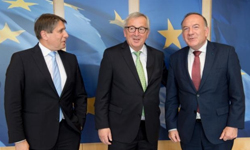 On 7 May, BusinessEurope President Pierre Gattaz and Director General Markus J. Beyrer met the European Commission President Jean-Claude Juncker. The discussion focused on BusinessEurope’s activities ahead of the European elections on 23-26 May and our priorities for the next months. Among others, BusinessEurope underlined the very good progress of the Juncker Commission in Trade Policy and stressed that the current window of opportunity to conclude the EU-Mercosur negotiations in the next weeks must not be missed. 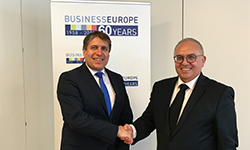 On 2 May, BusinessEurope Director General Markus J. Beyrer received H.E. Ambassador Mohamed Ridha Ben Mosbah, Ambassador of the Republic of Tunisia to the EU. The discussion focused on the current negotiations between the EU and Tunisia to reach a Deep and Comprehensive Free Trade Agreement (DCFTA), which aims at modernising and expanding the existing association agreement, to liberalise trade in areas such as services and agriculture and include rules to facilitate access to markets and attract investments. Beyrer said: “Tunisia has taken important steps in reforming over the past years and following the Arab Spring. However, more efforts should be dedicated to modernising the economy of the country and opening it further up to trade and investment. There are significant opportunities; nevertheless, we often hear from European companies interested in the Tunisian market that the legal framework should be further improved. In this regard, the DCFTA is a unique opportunity not only to enhance bilateral trade relations, but also to promote a positive reform agenda in Tunisia”. BusinessEurope maintains close relations with Tunisian business, also in the context of the Euro-Mediterranean partnership, promoting a number of initiatives for closer cooperation. 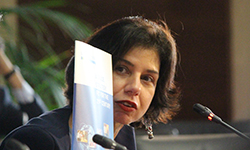 In two panel discussions in the European Business Summit, one concerning Africa and the other the EU Trade Policy, BusinessEurope highlighted the importance of rules-based trade to promote economic development and why trade tensions are negative for business and citizens. In the case of Africa “The Economic Partnership Agreements (EPAs) promote trade liberalisation and market integration not only between the EU and African countries but also among African countries. They support further integration of African business in global value chains, improve the business climate and constitute building blocks for Africa’s Continental Free Trade Area”, said Luisa Santos, BusinessEurope Director for International Relations. She pointed out that when it comes to trade policy, the EU must remain committed to rules-based trade and pursue an ambitious bilateral trade agenda that ensures leadership in times of trade tensions. “The EU cannot rely on others to lead and we need to explore new ways of relating with our main trading partners, including those in our neighbourhood. BusinessEurope's recent trade strategy paper presents some innovative ideas, like open free trade agreements.” Santos said. 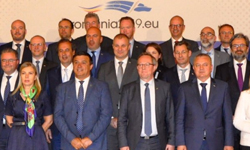 On 3 May BusinessEurope participated in the informal Competitiveness Council meeting in Bucharest where the Romanian EU Council Presidency invited stakeholders to join ministers for a discussion on entrepreneurship and the EU Single Market issues relevant for the future agenda after the European elections in May this year. An exchange on the energy intensive industries was also held over the working lunch. Speaking at a session on better implementation and enforcement of the Single Market rules, BusinessEurope Director for Internal Market Martynas Barysas noted that, as the European Political Strategy Centre paper on the EU industrial policy puts it, at the heart of the EU problem of scaling businesses is “Europe’s inability – or political unwillingness – to complete its Single Market” . This is why putting the Single Market back at the centre of the EU agenda was one of the top messages by BusinessEurope to the summit in Sibiu. Barysas stressed there should be no internal EU divisions between the “industry friends” and the “Single Market friends”, as these two policies should – and do - reinforce each other. He also called for much stronger commitment to and resources for implementation of rules at both EU and national level, as well as more open cooperation frameworks with stakeholders in order to improve the situation. “Poor implementation and enforcement of rules also means no basis for new rules, as we don’t know how actually the present rules would fully work”, he said. A number of ideas on how to make the Single Market rules work better on the ground were shared on the basis of BusinessEurope's strategy paper on the priorities for the Single Market beyond 2019. Heads of EU Member State delegations, and the Chairman of the Council High-Level Group on Competitiveness and Growth reacted and held a further discussion on the Single Market governance.