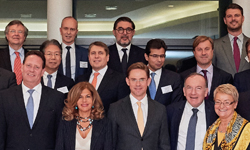 On 21 November, President Emma Marcegaglia, Director General Markus J. Beyrer, three Vice-Presidents of BusinessEurope and CEOs of its Advisory and Support Group gathered in Brussels and met EU leaders. The group exchanged views with Vice-President Jyrki Katainen on the challenges the EU is facing and on how to support growth and job creation, trigger investment and make Europe more competitive. With Commissioner Günther Oettinger, the CEOs discussed the Multiannual Financial Framework (MFF) post 2020 and the budget, but also Europe’s position in the world. The group also met Deputy Director General Khalil Rouhana to discuss the digitalisation of industry and the development of the digital economy and exchanged with Vice-President Maroš Šefčovič on investment in the EU energy sector, electricity markets, mobility and moving towards a connected Energy Union in Europe. Research and innovation, and the 9th EU Framework Programme was discussed with Commissioner Carlos Moedas. 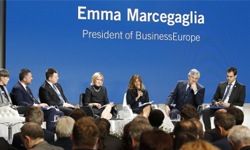 At the Gothenburg social summit for fair jobs and growth, which took place on 17 November 2017 and was co-hosted by the Swedish Prime Minister Stefan Löfven and the Commission President Jean-Claude Juncker, BusinessEurope President Emma Marcegaglia stressed that economic and social challenges need to be addressed in a coherent way, recognising that economic progress is the basis for social well-being. Europe must be competitive and do better in in terms of growth, employment and productivity to be able to finance social safety nets. If we do the necessary reforms, Europe can remain one of the best places in the world to live, work, and do business. 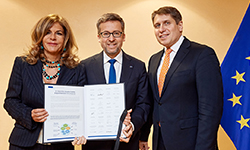 CEOs of 28 leading companies this week signed a statement reaffirming their strong commitment to EU research and innovation (R&I) funding programmes. The statement was handed over to the European Commissioner for Research, Science and Innovation, Carlos Moedas, by BusinessEurope President Emma Marcegaglia and Director General Markus J. Beyrer. It supports the EU framework programmes (FP) and the importance of the role the private sector plays for the success of EU R&I financing and innovation ecosystem. Companies bring private capital, infrastructures, networks, know-how and skilled workforce, maximizing the positive impact of the EU programmes. Funded projects with EU-added value ultimately bring benefits to the European society at large. “The growing momentum with a view to the next programme (FP9)”, President Marcegaglia stressed, “offers an opportunity to increase the EU budget on R&I,  reinforce the collaborative approach and overcome the innovation deficit in Europe”. BusinessEurope is looking forward to a constructive and fruitful debate with all stakeholders to build a strong programme to deliver economic impact and address societal challenges. 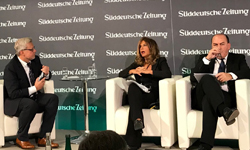 “A resilient economy is essential to alleviate citizens’ concerns about the future. It is crucial to fight protectionism and populism. And it is a central ingredient to address concerns about globalisation”, said BusinessEurope President Emma Marcegaglia during her intervention at the Süddeutsche Zeitung Economic Summit 2017 on 16 November in Berlin, which had as theme “The new world order”. The way to have a strong economy, Marcegaglia added, “is to become more attractive for investment and to maintain a fair and ambitious trade agenda opening new markets and creating sustainable growth and new business opportunities for enterprises of all sizes”. 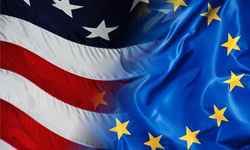 The meeting of the International Platform of the Federation of Enterprises in Belgium (VBO-FEB) on 17 November 2017 in Brussels offered an opportunity to discuss the US President Donald Trump’s international policies and the Administration’s stance on trade agreements such as the Transatlantic Trade and Investment Partnership (TTIP), the Trans-Pacific Partnership (TPP), and the North American Free Trade Agreement (NAFTA). The US disengagement is opening new opportunities for the EU to take leadership in Asia or South America. On the other hand, the challenges for EU companies stemming from the current US Administration policies are considerable. US sanctions, the tax reform expected to be adopted in the near future by the US Congress and how that impacts world trade and the bilateral EU-US relationship were the main topics discussed.  BusinessEurope Director of International Relations Luisa Santos warned that “2018 could be a challenging year with possible actions on section 232 for steel and aluminium and some disputes looming in the World Trade Organisation (WTO). We will also need to monitor NAFTA negotiations as the outcome will impact EU investments in the region”. 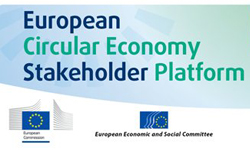 “The Circular Economy Action Plan will only be successfully implemented if stakeholder engagement is taken onboard. By launching the Circular Economy Stakeholder Platform (CESP), the European Commission and the European Economic and Social Committee (EESC) show that they are serious in moving ahead with this inclusiveness”, said BusinessEurope Industrial Affairs Director Alexandre Affre, while taking part in the first Coordination Group meeting on 22 November 2017. The meeting was organised by the European Commission and the EESC to set the scene for how the Coordination Group (CG) can shape the objectives of the CESP. “BusinessEurope is delighted to be part of the Coordination Group. It allows us and other stakeholders to broaden their perspective. Silo thinking on such an important topic as circular economy will not get us far”, Affre stated. He added that BusinessEurope brings valuable knowledge from the many good practices and challenges that it collected from business across Europe via its Circular Economy Industry Platform, and hope such knowledge sharing will allow us and others to raise awareness on the many business opportunities that circular economy can bring.

Me, Myself and AI: What future for artificial intelligence in Europe? 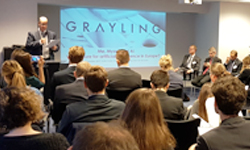 BusinessEurope spoke today at a breakfast event on Artificial Intelligence organised by Grayling entitled “Me, Myself and AI: What future for artificial intelligence in Europe?”. The event brought policy makers and stakeholders together to discuss opportunities and challenges posed by the roll-out of Artificial Intelligence (AI) technologies. When asked about future EU policy in this critical technological area, Vice Chair of BusinessEurope’s Digital Economy Taskforce, Liam Benham, expressed that as different AI uses pose different challenges, no horizontal one size fits all legislative approach can be taken. It is better to form an industry-policy maker dialogue to discuss a number of issues impacting a number of sectors in real time. Senior Director of Global Policy for Europe at the Information Technology Industry Council (ITI), Guido Lobrano, added that industry is committed to responsible and ethical principles to ensure a sensible roll-out of AI technologies in Europe. This event marks BusinessEurope’s expression of good will to begin a full dialogue with policy makers on AI. We will soon release our strategy paper to support this. 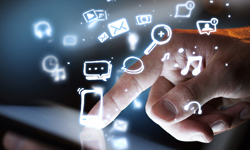 To simplify cross-border shopping, rules need to be the same around the EU. Only full harmonisation will guarantee this. That is why BusinessEurope warns against giving too many exceptions to member states in the commission digital content proposal.  The EU should refrain from regulating lifespan and durability in contract law. While companies are committed to improving sustainability and durability of goods, such policies are best pursued via product specific rules and not via contract law, which serves different purposes. These messages were part of a statement co-signed by BusinessEurope and other European business associations ahead of the European Parliament Committee on Legal Affairs (JURI) and the Committee on the Internal Market and Consumer Protection (IMCO) draft report vote on 21 November 2017. 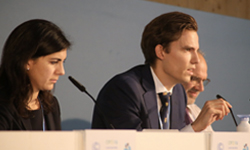 “Making people part of the problem puts the implementation of the Paris Agreement at significant risk. Instead, we should be working from the perspective to make everyone part of the solution. Business in Europe and mostly elsewhere will continue to be fully dedicated to implementing the Paris Agreement”, said BusinessEurope Adviser Leon de Graaf during the Major Economies Business Forum (BizMEF) Dialogue held on 12 November 2017 during the 23rd Annual Climate Conference (COP23). Several high-level policymakers, including from delegations of the United States, the European Union, the Fijian Presidency and the Polish Presidency of next year’s COP24 attended the Dialogue. Interested in what else BusinessEurope has been doing at COP23? Read our blog for more info here.