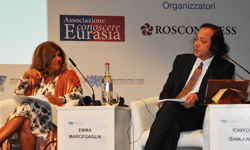 “There is a long and historical relationship between the EU and Eurasian countries. Our economies are already interlinked to a significant extent, but there are untapped possibilities that we should further explore for the benefit of our economies”, said BusinessEurope President Emma Marcegaglia at the Eurasian Economic Forum in Verona, on 19 October 2017. During the event, President Marcegaglia also stressed that China’s OBOR-one belt one road initiative can spur development in China and the EU but also in Eurasian countries “if the objective is to work together with the EU and EU companies in developing infrastructure and logistic facilities that can connect Europe and Asia to fulfil 21st century needs”, she concluded.

European industry key to respond to internal and external challenges 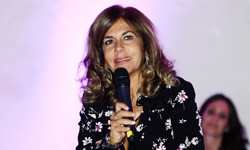 For Europe to successfully respond to the challenges it will face in the coming years, the focus should be on establishing an integrated and modern European industrial strategy, promoting the quality of public and private investment, increasing the attractiveness of Europe as an investment destination and completing and strengthening the internal market. It is also crucial to remove the barriers that still remain to free circulation and continuing the transition towards a genuine single digital market. This was the core message BusinessEurope President Emma Marcegaglia conveyed during her intervention in the seventh Italy-Germany Business Forum, organised by the national members from Italy, Confindustria, and Germany, BDI, in Bolzano on 19 October 2017. The Italian Minister for Territorial Cohesion and Southern Italy, Claudio De Vincenti, and the Presidents of BDI, Dieter Kempf, and Confindustria, Vincenzo Boccia, were also present. BDI and Confindustria signed a joint declaration during the forum.

Preparing for an ambitious Free Trade Agreement between EU and Australia 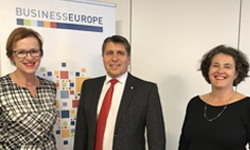 BusinessEurope Director General Markus J. Beyrer met Australia’s Chief Negotiator on the Australia-EU Free Trade Agreement (FTA), Alison Burrows, on 24 October 2017. All main aspects of future negotiations were discussed in a friendly atmosphere. “Negotiations are expected to progress at a steady pace as we share common views on many aspects of a possible deal”, Beyrer said. On chapters that are sensitive for the EU, the Australian Chief Negotiator was reassuring. She stated that Australia’s agriculture capacity was already largely absorbed by countries in their region with whom they signed FTAs, such as China, Japan and Korea. On geographical indications, Burrows affirmed that they were encouraged by the Comprehensive Economic and Trade Agreement (CETA) between EU and Canada precedent. Finally, on Trade and Sustainable Development chapter, Beyrer and Burrows agreed that the EU and Australia have different approaches on some issues but are both expecting very ambitious and high-level provisions. 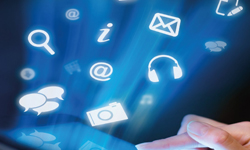 Today, the European Parliament narrowly confirmed the Civil Liberties, Justice and Home Affairs (LIBE) Committee’s mandate to lock-in their position on the e-Privacy report. While they aim to enable the e-Privacy Regulation as soon as possible, we do not believe this should be at the expense of legally uncertain legislation. BusinessEurope Director General Markus J. Beyrer commented: “The European Parliament narrowly confirmed its intentions to rush ahead and lock-in its position. This position is bad for our digital economy, the digitalisation of industry and better regulation on the whole.” BusinessEurope will now work closely with the Council to ensure their common position favours the economic and societal benefits that can be afforded by innovative based data processing. 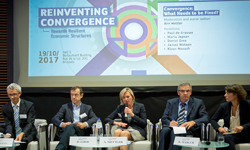 The Economic and Monetary Union (EMU) must deliver convergence toward strong growth in all member states. This was the key message of BusinessEurope’s Economics Director James Watson at the ‘Reinventing Convergence: Towards Resilient Economic Structures’ event on 19 October 2017 in Brussels. Organised by the European Commission’s in-house think-tank, the European Political Strategy Centre (EPSC), the event brought together senior EU politicians, stakeholders and academics to discuss how to drive upward economic convergence in the EU. Speaking on the panel “Convergence: What needs to be fixed”, Watson underlined the importance of deepening the EMU, the need to complete the single market, and (as highlighted in our annul Reform Barometer), the importance of member states undertaking growth enhancing structural reform, supported by the EU’s European Semester process. 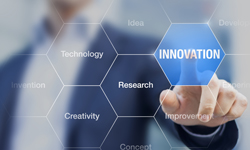 The upcoming EU framework programme for research & innovation, which will be the successor of Horizon 2020, brings a unique opportunity to strengthen the role of innovation in the European economy. At a meeting with EU member states’ research attaches on 24 October 2017, BusinessEurope’s Research & Innovation Working Group chairman Jan-Eric Sundgren stressed Europe’s poor ability to turn many excellent ideas into new markets, products and services and economically benefit the European society. Exploiting the results of research activities will be decisive for Europe’s future competitiveness and jobs. With two thirds of the spending coming from the private sector, European companies have a crucial role to keep the technological leadership in a number of areas. This will require an adequate support of the policy framework, as well as public funding leveraging private investments. Sundgren welcomed the conclusions of the recently published ‘Lamy report’ to double the EU funding for research & innovation and asked notably to increase the support to close-to-market activities. 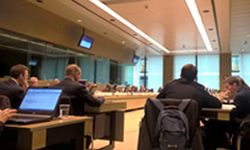 A renewed industrial policy for Europe is finally part of the EU agenda, and understood as fundamental for the Future of Europe. BusinessEurope welcomes the Communication of the European Commission as a first step of the process, stressing the need for structured way forward, also involving EU member states, in order to steer positive change without hurting our industry. This was part of the message delivered by Alexandre Affre, Director of Industrial Affairs at BusinessEurope, at a European Council Competitiveness Working Party on 23 October 2017. The discussion also covered more detailed aspects of a long-term vision for Europe, including new strategic objectives, the need to remain open in an increasingly protectionist context, and governance aspects of the topic. 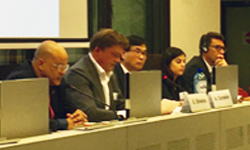 A roundtable on ways to put the partnership intro practice followed the annual Joint Ministerial Meeting between the EU and African, Caribbean and Pacific (ACP) countries that took place in Brussels on 20 October 2017. The roundtable gathered business representatives from all regions. On behalf of BusinessEurope, the Adviser Sofia Bournou emphasised the role of the private sector in the policy making for Development, especially in helping ACP countries attract sustainable and long-term investments. She explained that the EU offers a variety of tools, including the Economic Partnership Agreements and the newly developed External Investment Plan, which promotes a win-win trade relationship between the EU and the ACP regions. “However, we often hear criticisms about the effectiveness of those instruments. We are open to these critical views but we fear they are based on misinformation. What we need to do is explain what these tools are and how they work in practice, as we have plenty of success stories to share”, she said. Beyond EU instruments, Bournou added, in order to attract investments, it is important for ACP countries to develop an enabling business and legal environment, through regulatory reforms and the promotion of good governance practices. European companies have an extensive experience they are happy to share with their counterparts. 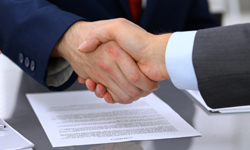 After years of setbacks with the Single Member Company Proposal and the European Private Company proposal withdrawals, it is time for companies to be able to fully benefit from their fundamental freedom of establishment. BusinessEurope looks forward to the adoption of new proposals in the area of mobility of companies by the end of this year. Digitalisation must be one of their main components. Companies should have the choice to interact with public authorities using digital tools as these are quicker, in some instances safer and more cost-effective. These messages where shared by Joëlle Simon, Vice-chair of BusinessEurope Legal Affairs Committee at a European Parliament's Committee on Legal Affairs (JURI) Workshop on Company Law held on 24 October 2017 in Strasbourg. 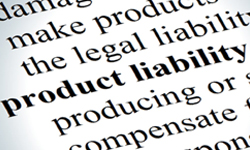 The current Product Liability Directive (85/374/EEC) is flexible enough to cover new technological developments, such as the internet of things and advanced robots. This was the position BusinessEurope Adviser Basje Bender presented at a conference organised by the European Commission on 20 October 2017. In the view of BusinessEurope, the Directive is generally future-proof and should not be revised. The conference followed a public consultation earlier this year, in which BusinessEurope participated. Also the preliminary outcomes of the consultation seem to point out that there are no serious problems with the functioning of the Directive in the areas under study.