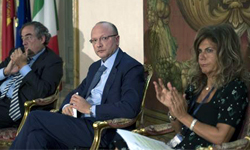 “Member states should work together to make the European Union more competitive. If we want the EU to play a stronger role in the international arena, we need to identify those policy areas on which there is a real need to focus and have a coherent vision to attract investment, create jobs and further strengthen economic growth”, said BusinessEurope President Emma Marcegaglia during her intervention in the 15th Forum of Dialogue between Italy and Spain on 2 October in Rome. The event brought together the Italian Prime Minister Gentiloni, the Italian and Spanish Ministers of Foreign affairs, the President of the Spanish Confederation of Employers' Organizations (CEOE) Juan Rosell, the President of Confindustria Vincenzo Boccia and key CEOs. “If we wish to achieve these goals, it is also essential to strongly believe in the European Union and defend the values it stands for, as BusinessEurope did from the very beginning of the European project”, Marcegaglia concluded.

Shaping the future direction of the EU trade policy 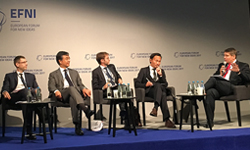 “The focus on delivering real economic results for consumers, workers and enterprises in Europe, as well as abroad, should remain the clear main objective of the EU’s trade policy”, said BusinessEurope Director General Markus J. Beyrer during a roundtable on “Trading up for a stronger EU27” on 28 September organized by the European Economic and Social Committee’s employers group. The debate was part of the European Forum for New Ideas (EFNI) in Sopot, a conference organized by the Polish member Lewiatan in cooperation with BusinessEurope. The inclusion of the EU’s core values in trade policy must be encouraged while keeping in mind that trade policy should not be expected to fulfil all of the EU’s foreign policy goals on its own. Markus Beyrer concluded that “cooperation with social partners and civil society is crucial for a trade policy that is both legitimate and effective”. 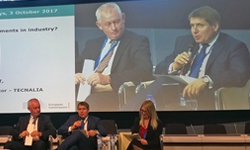 "Our society faces multiple complex and immediate challenges that impact a citizen’s quality of life: from climate change and mobility to urbanisation and an ageing population. Research and innovation by industry play a decisive role in anticipating and responding to these challenges", BusinessEurope Director General Markus J. Beyrer said at the Industrial Innovation Information Days in Brussels on 3-4 October 2017. Commenting on the EU policy landscape, he added: "Beyond Horizon 2020, a successful programme, the EU should speed up the implementation of the innovation principle to make regulation fit-for-innovation".

China’s reform agenda: it is time to deliver 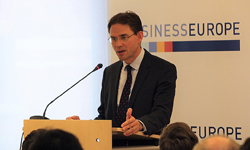 “EU-China trade and investment relations must be mutually beneficial, based on rules and on fair competition”, said Jyrki Katainen, European Commission Vice-President for Jobs, Growth, Investment and Competitiveness, during the event “2017: A Turning Point for China” at BusinessEurope headquarters on 28 September. The debate was held on the occasion of the European Union Chamber of Commerce in China’s (EUCCC) annual visit to Brussels to launch its position paper on China. “European businesses in China are starting to experience ‘promise fatigue’, and we need the Chinese government to deliver on its ambitious reform proposals outlined earlier this year”, stated Mats Harborn, President of the EUCCC. Luisa Santos, Director of International Relations at BusinessEurope, highlighted that “business supports China’s intentions to reform, but it is time for the government to start ‘walking the talk’. It is time to ensure that rhetoric is matched by reform: it is time to deliver”. The event was co-organised by BusinessEurope, the EUCCC, and the EU-China Business Association. Photos. Watch the video with speaker’s comments on the EU-China trade relations. 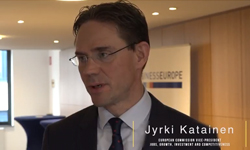 In this video, European Commission Vice-President Jyrki Katainen, BusinessEurope Director of International Relations Luisa Santos and the European Union Chamber of Commerce in China President Mats Harborn comment on the EU-China trade relations and their expectations for the future.

Industry calls for an end to data localisation 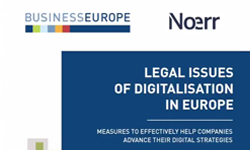 BusinessEurope and Noerr LLP released a study on legal issues of digitalisation in Europe on 29 September. It reveals daily digitalisation problems of industry in Europe from the grass roots level. This includes key findings on the approach needed to create conditions for Europe to lead in the global data economy. The value of the European data economy has the ability to increase to 739 billion EUR or some 4% of EU GDP by 2020 if the correct policies are set. BusinessEurope Director General Markus J. Beyrer said: “Our study on Legal Issues of Digitalisation in Europe is a clear message to Europe’s leaders meeting at the Digital Summit today in Tallinn. Businesses want to see an end to unjustified national measures that restrict the free flow of non-personal data in Europe.”

What are the legal issues of digitalisation in Europe? 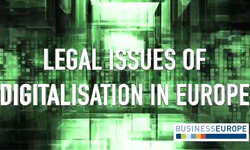 Based on our recently published study, BusinessEurope Director General Markus J. Beyrer comments on the main issues in this video message. 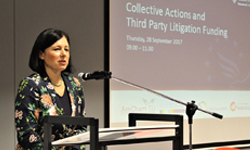 When it comes to enforcement of consumer protection laws, efforts at EU level should concentrate on improving public authorities’ resources and coordination, as well as promoting alternative means of redress (ADRs) amongst businesses and consumers. There is a lack of evidence supporting the need for a EU wide judicial collective redress instrument. If one should be proposed, the risk of abusive litigation, as it currently happens in the United States with class actions, would be difficult to contain. These messages where conveyed by Heiko Willems, Chair of BusinessEurope Legal Affairs Committee during a joint BusinessEurope-USChamber-AmchamEU-Eurochambres event on Collective Actions and Third-Party Litigation Funding on 28 September in Brussels. European Commissioner Justice, Consumers and Gender Equality Věra Jourovà, who also participated in the event, announced her plans for collective redress for March 2018. Photos of the event. 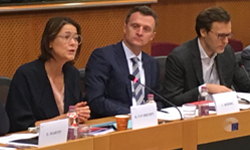 Speaking at a high-level Socialists and Democrats (S&D) Group seminar in the European Parliament on 28 September, BusinessEurope Director for Industrial Affairs Alexandre Affre said: “Europe must have a strategy to tackle the impacts of the fast technological, economic and political changes facing us. With half of European business integrated in global value chains, this should not be done by becoming inward-looking, but by creating the conditions for industry to adapt quickly and to anticipate future trends.”. The event brought together Members of the European Parliament (MEPs) from the S&D political group - including Kathleen Van Brempt, Martina Werner and Edouard Martin - and stakeholders to discuss the recently published EU industrial policy strategy. Affre commented: “The European Commission’s renewed strategy is an important step forward. We are now looking forward to discuss further steps for a structured way forward”.

Single Market: time to unleash the growth potential in the area of services 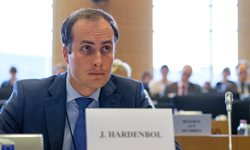 The European Commission Services Package presented earlier this year contains concrete proposals that can help avoid new barriers for doing business in other Member States. While the e-card proposals need work, BusinessEurope supports the proposed new notification procedure, and the proportionality test and guidance to reduce the number of regulated professions that can fragment labour markets. These messages were underlined by Jeroen Hardenbol, BusinessEurope Senior Adviser for Services, during a European People’s Party (EPP) hearing on the Services Package on 27 September in Brussels. The free movement of services is still underdeveloped in the single market, while this is the area in which great growth potential can be unleashed, Hardenbol highlighted. Not only linked to better implementation and stronger enforcement of existing EU legislation - which can add roughly 1.5% to EU GDP - but also to the development of digital services, servicification and the booming of e-commerce. BusinessEurope will continue to push the improving of proposals so that companies will feel the difference on the ground. We will also ask that sector-specific concerns are taken into account.

Durability and lifespan of products does not belong in contract law 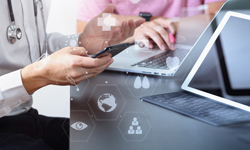 At a European People’s Party (EPP) event on small and medium-sized enterprises (SMEs) in Strasbourg on 2 October, Heiko Willems, Chair of BusinessEurope Legal Affairs Committee, pointed out business concerns on the European Parliament’s ideas to adopt different rules for the sale of similar products depending on whether these contain or not some form of software (e.g. smart fridges vs regular fridges). Willems urged the European Parliament to keep full harmonisation as the main approach in the digital content proposal and to ensure consistency of the proposal with the existing European data protection framework. He also added that rules on the lifespan and durability of products would be misplaced in the area of contract law. They would just create complexity and add confusion amongst businesses and consumers. 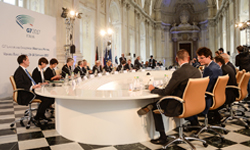 “Europe’s economies progressively recover and the employment outlook is also improving. The priority in this evolving context is to deliver structural labour market reforms at national level, to foster job creation, labour productivity growth, and a better match between jobs and people looking for work”, said Maxime Cerutti, social affairs director, at the G7 Labour Ministerial Meeting held in Torino on 29-30 September. Exchanges between the countries taking part in the G7, he added, can help identify solutions for European context.  Cerutti stated that Europe has lagged behind the United States over the last years in terms of labour productivity growth, and that retraining the workforce will increasingly matter as labour markets adapt to the digitalisation process. “Improving the performance and cooperation of public and private employment services is therefore a priority, notably in terms of achieving better employment outcomes and a better match of the available workforce with job vacancies”, he concluded. 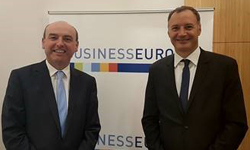 BusinessEurope Economic and Monetary Affairs committee (ECFIN) welcomed to its meeting on 27 September Gabriele Giudice, Head of Unit of the European Monetary Union (EMU) deepening at the European Commission’s Directorate General ECFIN. Following the publication of a European Commission reflection paper on deepening the EMU, recent speeches by European Commission Presidents Juncker and French President Macron, and with a special summit now scheduled for December, the discussion on the EMU reform reaches a vital stage. After Giudice’s presentation on the reflection paper, the group emphasised the importance that business places on deepening EMU, with work still to be done in areas such as banking union and the co-ordination of members states’ economic policies. The committee will look to build on its previous communications in this area, such as its letter to President Juncker in February, to develop more detailed positions on the proposals in the reflection paper in the coming weeks. 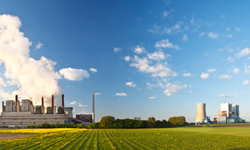 “BusinessEurope, with all its national federations, are seriously worried about the proposed new mandate by the Estonian Presidency”, BusinessEurope Director General Markus J. Beyrer stated in a letter sent on 4 October to EU Ambassadors on the reform of the European Emissions Trading System (EU ETS), ahead of their meeting on Friday 6 October. Beyrer continued that “If there is no 5% conditional shift and if the different funds are not solely funded with auctioned allowances, then it will be impossible for the European business community to accept the higher ambition coming from the Market Stability Reserve (MSR) mechanism”. He concluded the letter by saying that “EU industry is committed to invest in low-carbon technologies and to create jobs in Europe, but will only be able to do so with the right framework conditions”.

Mind the impact of new capital requirements for banks 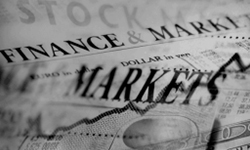 New capital requirements should not increase financing problems for companies and discourage the use of hedging instruments, BusinessEurope Director General Markus J. Beyrer wrote to the European Commission Vice-President Valdis Dombrovskis and the European Parliament. Overall, BusinessEurope supports the proposed amendments to the capital requirement rules (CRD5/CRR2) but it made some suggestions to mitigate possible negative impacts on financing and hedging.