The business vision for the future of Europe 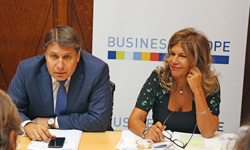 On 8 September BusinessEurope launched the paper “The way forward: the business vision for the future of the European Union”, ahead of European Commission President Juncker’s speech on the State of the Union on 13 September. In this scenario, BusinessEurope and its member federations demonstrate their commitment to the European project and the common European values, developing a number of elements that business believes are necessary to build a Europe that is closer to its citizens, that is able to create a vision for the future, and that delivers concrete benefits along the way. BusinessEurope President Emma Marcegaglia commented: “Europe is one of the best places to live, work, and do business in the world. And this is not by chance. The European Union made the European way of life possible. BusinessEurope and all its member federations are strong supporters of the European project, and we have been at the forefront of its construction from the very beginning. We do believe that improving and adapting the European project is a continuous process. But for this, Europe must be a place where we find common answers to common problems.” Read more - Photos

BusinessEurope comments on the ambitious scenario for the EU 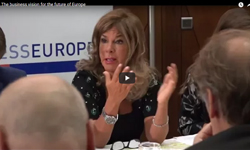 In this video, BusinessEurope President Emma Marcegaglia and Director General Markus J. Beyrer comment on the business vision for the future of the European Union. 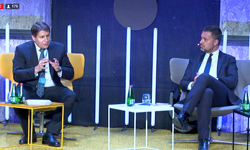 “To embrace benefits of digitalisation, all Member States need to achieve employment regulations that are sufficiently flexible to help companies create jobs and adapt to changing economic circumstances. There is no need for new EU social directives”, BusinessEurope Director General Markus J. Beyrer said during the conference “Future Of Work: Making It E-Easy”, organised by the Estonian Presidency in Tallinn on 13 September. Policy-makers and social partners, he added, can help companies and workers grasp the benefits of digitalisation. Improving digital skills in particular is an economic and social priority to increase labour productivity and enable workers to evolve or move into the newly created jobs. Moreover, diverse contractual arrangements are essential to match the needs of both employers and workers, and Member States may need to adapt social protection systems to make them sustainable and facilitate labour market mobility.

New opportunities thanks to the EU-Vietnam Free Trade Agreement 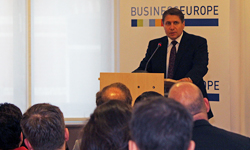 Expected to be ratified in 2018, the EU-Vietnam Free Trade Agreement (FTA) is one of the most ambitious agreements the European Union has ever negotiated with a developing country. A reflection on its possible impact was launched on 7 September in Brussels during the conference “The EU-Vietnam Free Trade Agreement: what’s in it for European enterprises and Vietnam’s reform process?”, jointly organised by BusinessEurope, EuroCham Vietnam and the EU-Vietnam Business Network. “The EU-Vietnam FTA is a very ambitious and positive agreement. We trust the deal will serve as an example for future agreements with other trading partners in the region” said Markus J. Beyer, Director General of BusinessEurope. Read more - Photos 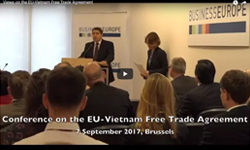 Watch this video to know more about the new opportunities and benefits that the EU-Vietnam Free Trade Agreement can bring. 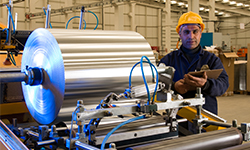 “We have welcomed the European Commission’s proposal on the EU trade defence instruments introducing a new methodology for the calculation of anti-dumping duties”, Luisa Santos, Director of international relations at BusinessEurope, said at the seminar “Explaining the EU's shift in position on China's Market Economy Status”, organised by the European Centre For International Political Economy (ECIPE) on 12 September in Brussels. In May 2017, BusinessEurope adopted an official position regarding the new trade defence methodology, stressing the need for compatibility with the World Trade Organization (WTO), legal certainty and procedural clarity to avoid any additional burdens on EU industries, while maintaining effective defence measures against unfair foreign trade practices. “Steel is not the only sensitive sector and overcapacity remains a matter of serious concern to us. The EU must adopt a country-neutral methodology and equip itself with effective trade defence instruments”, Santos added. 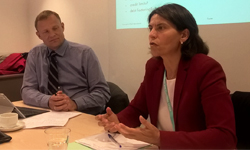 BusinessEurope’s VAT Working Group was pleased to welcome the European Commission’s new Director of Value Added Tax (VAT) at DG TAXUD, Maria Teresa Fabregas-Fernandez, to its meeting on 8 September. Fabregas outlined the Commission’s plans and priorities in this area, building on the 2016 Action Plan on VAT, including a proposal for a definitive regime for cross-border trade. She also discussed other Commission’s priorities such as tackling fraud, supporting business and helping the digital economy. The group welcomed the Commission’s efforts to modernise VAT, but also stressed, in line with our position paper on the 2016 Action Plan, that it is important that the new VAT-system is as neutral as possible regarding businesses’ decisions to invest and trade across borders. The group also emphasised that the high administration cost to businesses of acting as unpaid tax collectors must be significantly reduced.

Comments on Governance of the Energy Union proposal 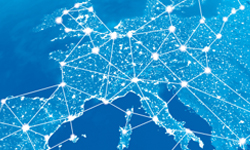 BusinessEurope published a new statement calling on the policymakers to stay true to the original role of the European Commission proposal on the Governance of the Energy Union, as well as to put the competitiveness back on the agenda. Even though the proposal, as an integral part of the ‘Clean energy for all Europeans’ package, goes in the right direction complementing the overall framework and shall contribute to a better enforcement of the energy and climate policies in the member states and on the EU level, there have been attempts to bypass other legislative proposals. Respecting the coherence and complementarity of the regulatory instruments will contribute to more cost-effective measures and solutions in the Member States. BusinessEurope also stresses the need to define national objectives and planning with regard to competitiveness, while taking into account the potential impact on consumers.