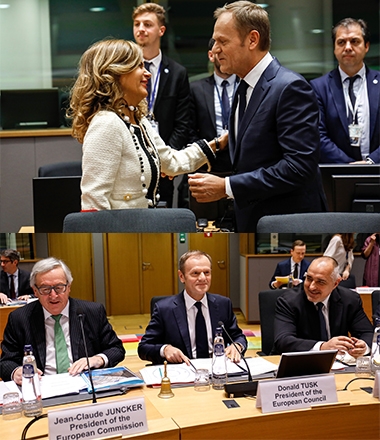 Speaking at the Tripartite Social Summit on 21 March 2018 in Brussels, on the eve of the Spring European Council, BusinessEurope's President Emma Marcegaglia stressed that “in today’s challenging world, it is more important than ever to make sure that our social market economy continues to thrive. 2017 has been a good year for the EU economy, but in a situation where the US introduce a tax reform, which will boost their national investments, and Europe is facing an aggressive Chinese approach via their Belt and Road Initiative (BRI), the EU must urgently take action to maintain its economic position in the world. The EU must make sure the post-2020 Multiannual Financial Framework is in place before the European elections. We also need to be ambitious on trade agreements, on the Single Market, on digitalisation, on industrial policy, on the Capital Markets and Banking Unions and on further strengthening our public finances”. Speaking on labour markets reforms, President Marcegaglia stressed that “skills shortages are at their highest level in over 20 years, posing a real risk that the falls in unemployment will soon slow. Labour markets and skills are therefore a key priority for reforms in 2018. In addition to tackling skills mismatches which create bottlenecks to growth, we must facilitate labour market participation of all.  For that we need diverse forms of employment. And we must reduce non-wage labour costs, through targeted cuts in the tax wedge”. During her intervention, Ms Marcegaglia also conveyed the clear messages on Brexit and US tariffs emphasised in BusinessEurope letter to the Spring European Council. © Photo: European Union