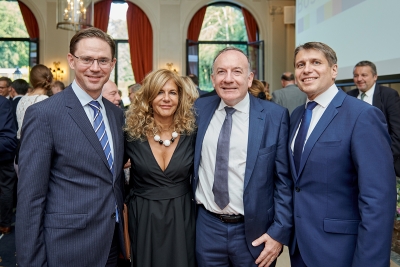 On 12 July, BusinessEurope member federations together with guests from European associations and institutions, gathered in Château Sainte-Anne in Brussels to thank the outgoing President Emma Marcegaglia and welcome her successor, President Pierre Gattaz. During his first intervention as President of BusinessEurope, Pierre Gattaz stressed that we might be at a turning point concerning Europe’s future and place in the world.  “Companies are the keystone to build a stronger Europe, a more united Europe, an open Europe, a human Europe. Defending our European Union is a worthy cause”, said Pierre Gattaz. In his keynote speech, the Vice-President of the European Commission, Jyrki Katainen, warmly thanked Emma Marcegaglia for her commitment to defending free trade and European values and welcomed the similarity with the European vision of  President Gattaz. Read the speeches of Emma Marcegaglia and Pierre Gattaz.