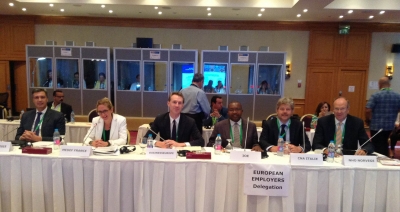 In the framework of the 3rd Union for the Mediterranean (UfM) Ministerial Conference on Employment and Labour held today in Jordan, with key leaders such as European Commissioner Marianne Thyssen and Jordan’s Minister of Labour taking part, the social partners launched a joint declaration on social dialogue. This is the first time that Euro-Mediterranean trade unions and employers have agreed a joint declaration on social dialogue and its importance in addressing employment and labour market challenges in the Euro-Mediterranean region. Social dialogue in the EU and the Southern Mediterranean region can play a vital role in strengthening economy growth and competitiveness, decent work and social cohesion, to reduce poverty and inequalities and to ensure a peaceful transition to democracy. The UfM has led important initiatives, but in the attached declaration the social partners from both regions highlight areas where better cooperation is needed.