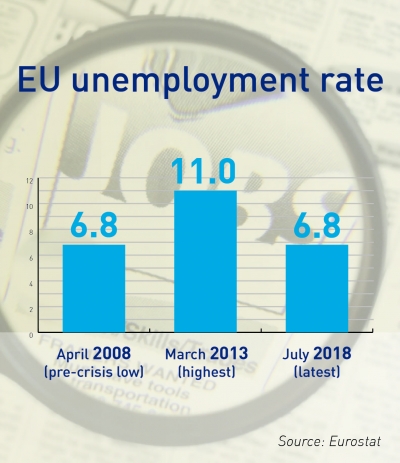 EU unemployment at its lowest since the financial crisis

The strengthening of economic growth has led to a further improvement in labour markets. Eurostat’s latest unemployment figures, released today, show that EU unemployment is with 6.8% in July 2018 back to pre-crisis levels, and well below the 11% in March 2013 at the peak of the Eurozone crisis.

Despite these improvements, it is worth noting that unemployment rates still remain uneven across EU countries, with three EU Member States facing rates (well) above 10%. Of particular concern is that even at this early stage of the recovery, there are already signs of the emergence of a structural mismatch, where business across the EU increasingly report difficulties in hiring workers. As our Spring Economic Outlook outlined, the share of industrial enterprises which indicate that insufficient labour limits their production is already at twice the pre-crisis share and the highest on record since 1985.

Against this background, we need to see urgent policy action to avoid that labour market mismatches increasingly act as a break on economic growth over the coming years. We need to improve work-orientated learning for all age groups, promote digital skills, financial literacy and the subjects science, technology, engineering, and mathematics (STEM). We need to ensure that regulation, collective-bargaining structures and the tax system all support employment creation.