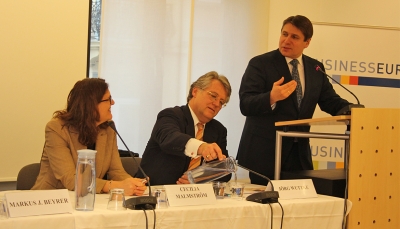 “China can demonstrate leadership when needed. We saw this during its G20 chairmanship, in China’s support for the Paris Climate Agreement, and in President Xi’s speech at Davos. Now we ask China to take charge of rebalancing its relationship with the EU, to reciprocate on market access and investment facilitation, and to play its part to uphold the multilateral trading system”, Markus J. Beyrer, Director General of BusinessEurope, said at a business seminar on China hosted at BusinessEurope. He welcomed Commissioner Malmström, who highlighted that Europe’s offer to China is one of open trade, but free and fair trade based on values and reciprocal market access. Jörg Wuttke, President of the European Union Chamber of Commerce in China, focused on China’s domestic economy and concluded that despite slowing growth, China still has the opportunity to undertake important reforms, but it needs to muster political will before the window of opportunity turns critical. Photo gallery